MANILA. Philippines- Typhoon Karen (international name: Sarika) devastated some parts of Northern Luzon and Central Luzon over the weekend but its coming may come as a good omen for Ginebra fans. Apparently, a similarly-named typhoon also hit the country  in 2008 just Barangay Ginebra Gin Kings won a PBA championship.

Carlo Pamintuan of Sports 5 shared news clips of his interesting discovery on his Twitter account with the caption:  “8 years ago, a typhoon named Karen also entered the Philippines before Ginebra Ging Kings won the championship. Will history repeat itself?” 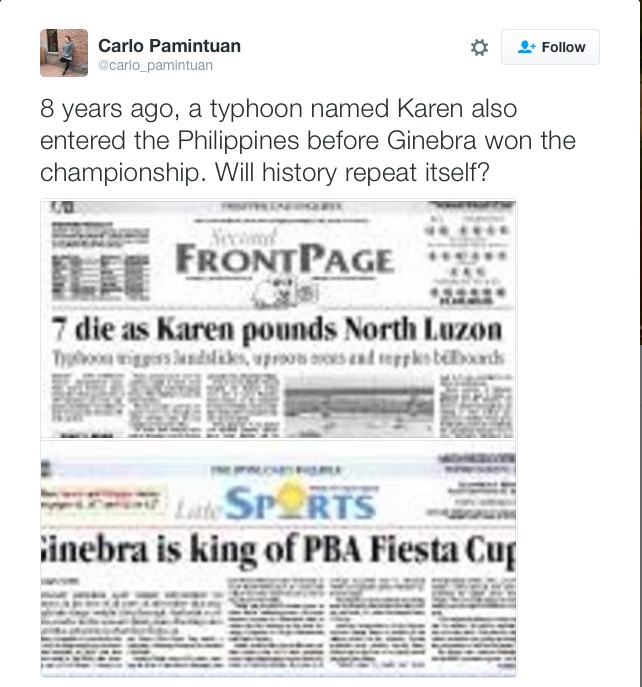 In 2008, typhoon Karen (international name: Nuri) took the lives of 12 people and affected about 300,000 people particularly on Northern Luzon. While signal No. 3 was up over six provinces due to typhoon Karen, Ginebra won the 2008 Fiesta Conference title against Air21 in Game 7 held on August 20, 2008.

It was the last time Ginebra Gin Kings earned a title.

Eight years later, typhoon Karen was once again linked with the popular PBA team as it threatened to postpone Game 5 of the 2016 Oppo PBA Governors’ Cup finals. The crucial game proceeded with Ginebra beating the Meralco Bolts 92-81 taking a 3-2 lead on Sunday, October 16 at the Smart Araneta Colisuem.

Ginebra Gin Kings is now only one win away from ending its 8-year title drought. The two teams are set to compete for Game 6 on Wednesday, October 19 at the Big Dome.

8 years ago, a typhoon named Karen also entered the Philippines before Ginebra won the championship. Will history repeat itself? pic.twitter.com/0IVy42ATU8

Although PBA didn’t specify Cone’s statement, it is believed that Cone airing his frustration over the officiating in Game 3 was the reason why he was sanctioned.

During the post-game press conference, Cone lamented over the way referees treated Sol Mercado, who picked up 6 fouls in 10 to 12 minutes of play.

“I felt today the referees had an eagle-eye on him tonight. The stuff that he was doing last game he couldn’t do tonight,” Cone said.