This is simply touching.

Two students with Down Syndrome were recently crowned as the Homecoming King and Queen for the year at the Central Bucks High School South, Pennsylvania. Students voted them both. 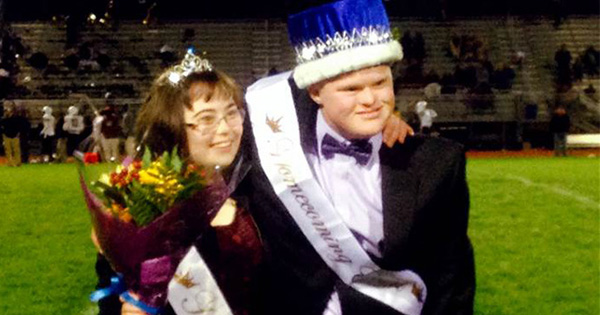 Nick McGee was absolutely thrilled with the victory and, as can be seen on the video below, ran back to the other students and led them to chat “I believe that we will win!” He then gave fellow winner Lily Bowman a big hug as they both get crowned for being King and Queen for 2015. Kim, Nick’s sister, caught everything on camera and shared the heartwarming footage with the world by uploading it on YouTube.

Senior student Taylor Dunn, Nick’s date, said “It was probably the best moment of my entire time at CB South. I couldn’t contain any emotions. It was amazing.”

Facts About Down Syndrome

Contrary to popular belief, Down Syndrome is not considered as a rare condition. In fact, some experts agree that it is the most common chromosomal disorder. In the United States alone, 1 out f 691 babies are born with Down Syndrome, making it around 6,000 babies per year.

The National Down Syndrome Society reports that about 400,000 people living in the United States have Down Syndrome.

The disorder is caused when an individual has full or partial chromosome 21 copy. The extra genetic material changes the person’s development course and thus causes Down Syndrome characteristics.