MANILA, Philippines- Senator Antonio Trillanes IV has provided an affidavit in exchange for a bank secrecy waiver from Mayor Rodrigo Duterte during a meeting with the presidential candidate’s lawyer, Atty. Salvador Panelo, at the Bank of the Philippine Islands (BPI) Julia Vargas branch on Monday, May 2.

In his interview with Balitanghali, vice presidential aspirant Trillanes called Duterte a coward for not keeping his promise. Duterte earlier agreed to sign the waiver if Trillanes would execute a formal affidavit indicating his sources on how he got Duterte’s alleged bank details. 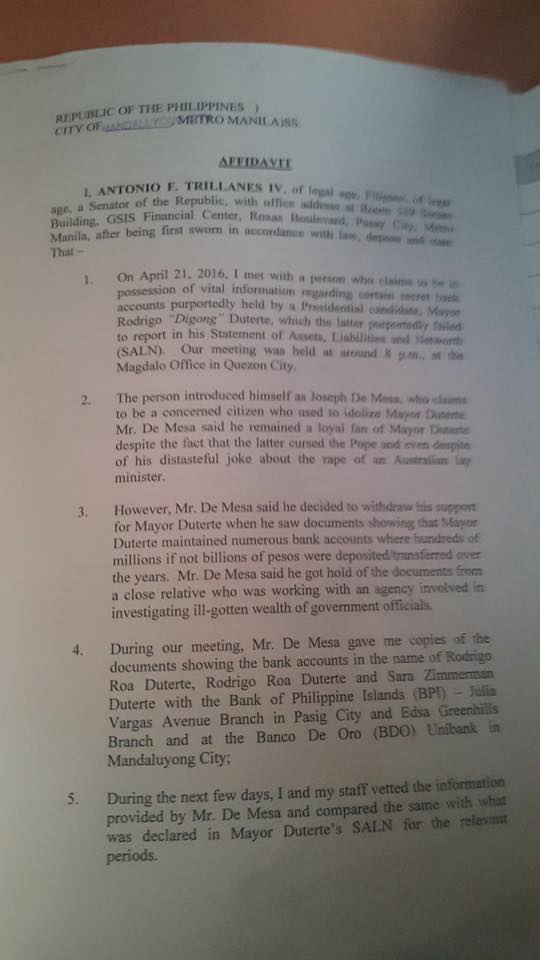 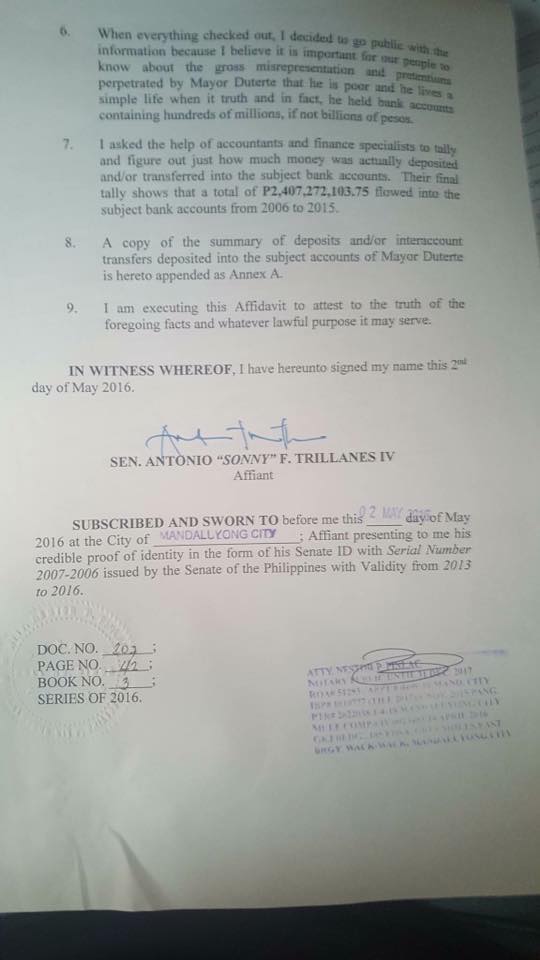 (They said they will sign a waiver but they didn’t bring one. They really have no intention of having it opened.)

In the affidavit, Trillanes provided documents detailing how he got information on the two BPI bank accounts of Duterte allegedly containing P2.4 billion. According to Trillanes, he received the sensitive information from a certain Joseph de Mesa, a former supporter of Duterte.

“I asked the help of accountants and finance specialists to tally and figure out just how much money was actually deposited and/or transferred into the subct bank accounts. Their final tally shows that a total of P2,407,272,103.75 flowed into the subject bank accounts from 2006 to 2015,” Trillanes wrote in the affidavit.

Instead of signing a waiver, Panelo requested BPI to provide a copy of the account balances of the tough talking mayor’s bank accounts. According to him, there’s no need for them to disclose the full transaction history since they only need to show that the accounts never held the amount Trillanes has alleged.

Panelo had already asked the bank for a certification that the controversial bank accounts never had P211 million. However, it will take BPI 7 days to look into their request due to legal issues. If the 7 day-period will only include banking days, then BPI would only be able to disclose Duterte’s bank details on May 11, two days after the national elections.