The tricycle driver who was caught trying to destroy the delivery truck of Geremiah Ngan on Tuesday, August 16, has been caught by authorities in Barangay San Antonio in Sto. Tomas Batangas. The assailant identified as Noviem Manzareno is a known drug user, according to their barangay chairman.

The incident was captured on Ngan’s dash cam which he shared on his Facebook page in order to warn his loved ones. The video, which spread like wildfire on social media, earned the ire of netizens. 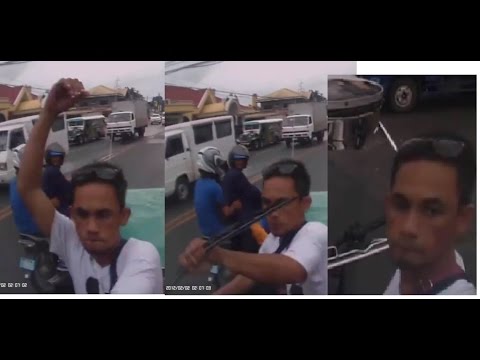 Prior to the incident, Manzareno’s tricycle hit the side mirror of Ngan’s delivery truck. Ngan’s driver Elbert Tagob pulled over to fix the side mirror, but a few minutes later, an enraged Manzareno suddenly went berserk and began hitting Ngan’s vehicle. In the video, he was caught hitting the windshield and tearing down the wiper of the delivery truck. Ngan and Tagob didn’t fight back.

Manzareno, who is on the list of suspected drug personalities in his barangay, was suspended by his toda for three days and will be receiving counselling from his baranggay since Ngan decided not to file a case against him.

“The hassle that we have to go through just to get the papers rolling, ipapa-pulis mo pa and lahat so hindi na. I really just posted the video just keep my friends and family aware,” Ngan told ABS-CBN News.

In his interview with ABS-CBN News, Manzareno claimed that he was provoked after Tagob swore at him. However, Tagob was not heard swearing in the dash cam video. Furthermore, the assailant insisted that he was not under the influence of drugs when he attacked them.

Manzareno later apologized for what happened.

Watch the video of the incident.

How to Stay Calm during Road Rage

During road rage incidents, it is important to know that you can’t control the reactions of the other driver but you can take control of your own emotions. Here are some tips on how to stay calm during road rage, according to WikiHow.