Earlier this year, pop superstar Madonna made headlines after posting a photo of her flaunting her hairy underarm on Instagram.

Apparently, girls have taken Madonna’s statement to the next level with the newest beauty trend. As if the world isn’t crazy enough, some ladies on Instagram and Tumblr have started dyeing their armpit hair pastel. 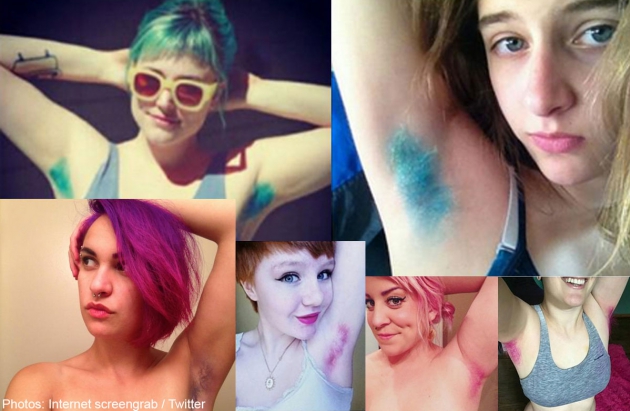 Dubbed by Cosmopolitan as an “awesome hair color trend” , the “rainbow-color” pit hair craze has been going on for a while, said Anna Biotics, the lady behind the Instagram page Lady Pit Hair.

Anna started dyeing her pit hair a year ago. While she is pleased with the results of armpit hair colouring, she mentioned the difficulties of the process. A bleach that is too strong can cause burn, while you get to have coloured pit stains when your armpit sweats.

Furthermore, Anna said that the trend is not just for aesthetic purpose as it has also been instrumental in conveying a campaign.

”Some of my followers have dyed their underarms pink for breast-cancer awareness,” she said.

Madonna isn’t the only celebrity who defied body hair norms.

Hollywood sweetheart Julia Roberts already sported the hairy pit “trend” way back in 1999 when she attended the London premiere of the movie Notting Hill. Photos of her exposed underarm hair circulated all over the net. In 2010, the A-list actress was once again spotted with unshaved armpits while spending the holiday with husband Danny Moder in Hawaii.

Diva Beyonce seemed to ran out of razor when she attended a film premiere in 2008. Her fans were shocked after seeing her unshaved pit at the Cadillac Records opening.

During the 31st Annual American Music Awards in 2003, hit maker Britney Spears’s bushy armpit became a topic of discussion for quite sometime.

We’re not sure whether these ladies were trying to make a statement or just completely forgot to get rid of their extra hair. But according to some experts, the hairy armpit style was a cutting edge trend before the 1920’s.

However, because of fashion revolution in the 1920’s, women were obliged to shave their armpit hair.

“It was largely pushed by advertising suggesting that women could be fashion­able only if they had hair-free armpits. Of course that also tapped into women’s insecurities and a whole new industry was born, ” Merran Toerien said.