A traffic enforcer is gaining praise from netizens for his honorable sideline job as bibingka and ‘kakanin’ vendor.

Many netizens who personally encountered the officer mentioned how he seemed to be really courteous to the motorists, selling the food like any other vendor and not trying to force them to buy despite his status.

With all the negativity surrounding traffic enforcers and their ‘kotong skills’, the traffic enforcer is like a breath of fresh air. His honorable sideline has already earned him the recognition from netizens in the past, yet this is perhaps the first time that someone got a clear picture of him.

The photo by Czes Rivera was shared by Top Gear Philippines, with a caption, “Instead of resorting to bribes, this traffic officer sells bibingka for his children’s tuition.” 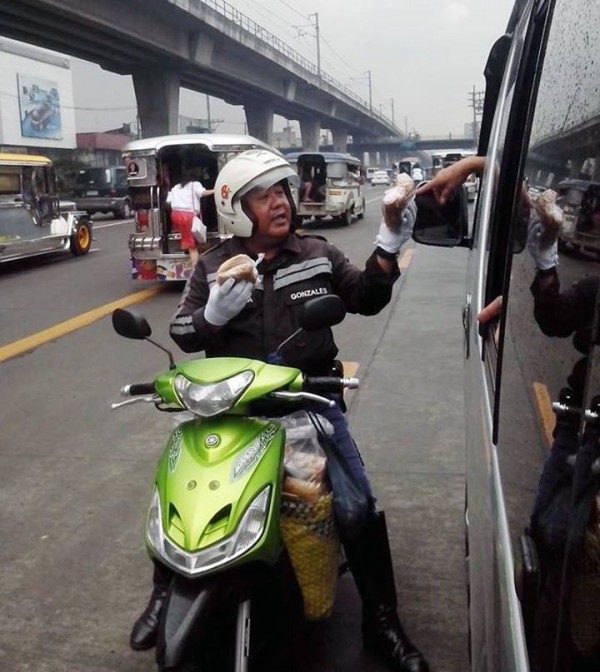 Although Rivera was not able to obtain his name, the photo clearly shows his nameplate: GONZALES.

The way we look at it, this man is a father his kids will surely be proud of.

Yes, we know how traffic enforcers like him probably have low wages, yet he is doing something great to augment his family’s income. What’s so wonderful about it is that he is not resorting to taking bribes or ‘kotong’ from motorists to feed his family and send his kids to school. Instead, he sells bibingka and other kakanin!

The Facebook post quickly became viral, gaining close to 6,500 likes within 30 minutes. Most of the people who commented praised the traffic enforcer, though there were those who pointed out that Gonzales is still wearing his uniform, was counterflowing, and probably selling those bibingka during his work hours.

Still, many defended his actions, saying there are also many traffic enforcers who are just texting or chatting on the job, while Gonzales is doing something good for his family.

Just as the other netizens hope, we seriously hope he does not get in trouble because of what he is doing. This man actually deserves an award!

We at RachFeed salute you, traffic enforcer Gonzales. Keep up the good work!