In perfect character, Robert Downey Jr. dons his Tony Stark suit to personally deliver an “Iron Man” bionic arm to a young fan who does not have a right arm.

Alex was born with a partially developed right arm but this does not stop him from enjoying fun activities enjoyed by boys his age. The 7-year-old boy loves to drive around on his bike and absolutely enjoys superhero movies like “Iron Man”.

Thus, it was but fitting that he receive a 3D-printed bionic Iron Man arm from Tony Stark, errr Robert Downey Jr, himself! 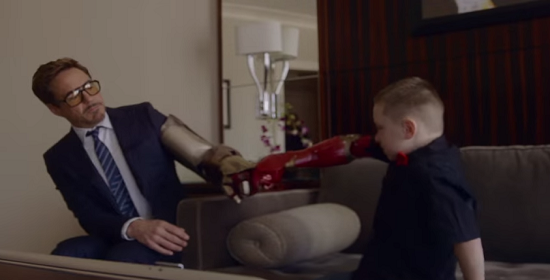 In a hotel room, Tony Stark opens two suitcases marked with “Stark Industries”. What could be inside these suitcases? An arm for Alex and an arm for him, of course!

I love how Alex was so cool about the whole thing and did not easily give away the fact that he actually knew he was talking to Robert, the man who plays Iron Man in the movies, until someone asked him. Great kid! Have fun with your new Iron Man arms…

One of the latest technologies to be successfully used in medical and manufacturing industries, 3D printing has changed the way things are done.

As was exemplified by the Iron Man bionic arm Alex received, 3D printing technology can be used to create extra limbs for people who have lost theirs because of sickness or an accident or were born without limbs. This does not only work for people but for animals as well.

Right now, the cost of 3D printing is still considered expensive yet the results are so amazing that we could all really change our perspective on things and start thinking of this new technology as a cheaper alternative to the stuff we’ve been used to.