No matter how childproof are homes are, we as parents can’t help but get worried for the safety of our children. With toddlers roaming around the house, a tiny mistake can instantly result into tragedy.

A two-year-old girl from Oklahoma suddenly died two days after Christmas for a disturbing reason. Brianna Florer’s doctors believed that a battery smaller than the size of the coin is the culprit behind her untimely death. 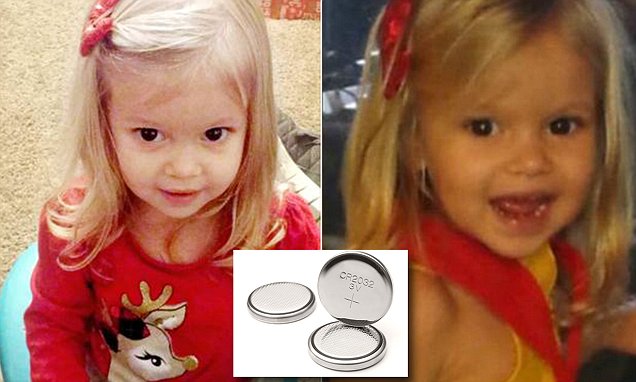 According to Kent Vice, Brianna’s grandfather, the toddler fell ill and had a low grade fever a few days before her death. When she started turning blue and throwing up blood, her parents Brian and Stephanie immediately called an ambulance and rushed Brianna to Grove Hospital.

After an x-ray revealed that Brianna ingested a button battery, the young girl was transferred to another hospital for surgery to remove the foreign material. However, the operation didn’t save the young girl’s life.

“They operated on her for 2 hours, but they couldn’t stop the bleeding. They believed the battery ate through to her carotid artery by way of her esophagus,” Kent recounted.

It is believed that Brianna ingested the battery within six days of her death.

A GoFundMe page has been set-up for the family of Brianna to cover for the costs of the unexpected funeral.

Within two hours of ingestion, the battery can react with saliva and cause serious damage to an individual’s body, according to Kidshealth.org.

Some symptoms of battery ingestion include fever, nausea and vomiting, coughing, breathing problems, abdominal pain, discoloured or bloody stool, diarrhea, irritability, throat pain and refusal to eat or drink. If your child has any of these symptoms, bring him or her immediately to the emergency room. Don’t attempt to make your child throw up and never allow them to eat or drink anything.

More importantly, childproof your house as much as you can and supervise your children at all times.