Home
News
News & Culture
Toddler Accidentally Scratches Neighbors’ Car. What The Neighbors Did Next Will Shock You.

Having two toddlers at home made me realize that accidents can really happen no matter how watchful you are. These little beings can be a little clumsy at times and unintentionally cause damages.

Take for instance a three-year old toddler from UK who accidentally put a dent on the vehicle of his neighbours while opening the car’s door. Although the parents of the tot were pretty much aware of the consequences of their child’s action, the honest parents owned up to their child’s mistake and told the owner they would cover for the repair.

Days later, the toddler’s parents received a letter containing the invoice for the car damage through the post.

Here’s an image of the invoice. 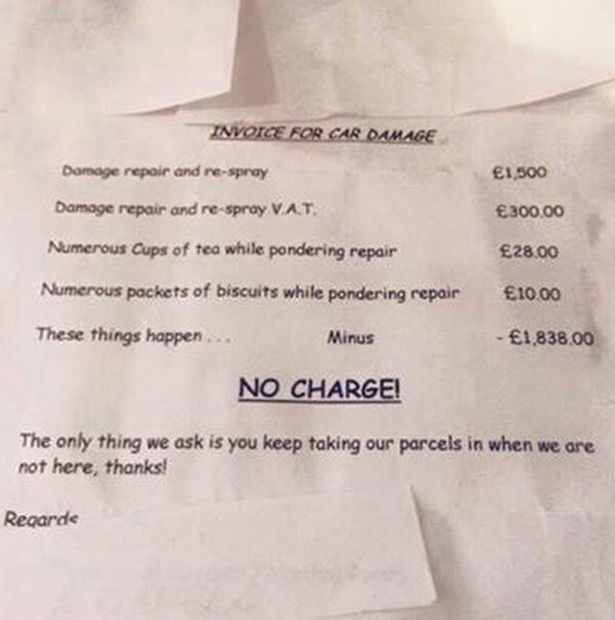 Astounded by their neighbors’ response, the unnamed parents posted the bill on Facebook which quickly went viral. I can just imagine how happy these parents were after receiving the unexpected letter. Hopefully such positive act will inspire more people to do an act of kindness.

Police Comforts Toddler Who Lost Dad in a Car Accident

A policeman from Brighton, Colorado was seen trying to pacify and comfort a two-year-old girl who lost her dad in a car accident. The touching moment was luckily caught on photograph which took the Internet by storm.

Officer Nick Struck revealed that he sang the nursery song “Twinkle Twinkle Little Star” to distract the girl from the chaos happening around them.

“The first thing we do when we get on scene is we just try to, if we can comfort anybody, of course we’re going to go to the kids. So then the role we do is, to keep them safe, what would I want that dad to do if it was my daughter,” he told The Daily Mail UK.

The accident, which involved a single-vehicle crash at 76 Brighton Colorado, took the life of one adult. Despite the fact that all of them except for an infant were not wearing seatbelts, one adult and four kids survived the accident.