Home
Entertainment
These Triplets Got Married at the Same Time, Wearing Identical Gowns

Guests in a wedding in Brazil were amazed at the three beautiful brides walking down the aisle together – not just because they were doing a triple wedding but because these stunning beauties were triplets wearing identical gowns!

They even had their hair and makeup done in the same way; only their bouquets were of a different color.

I wonder if the grooms (three different men, of course!) were confused as to who was who. 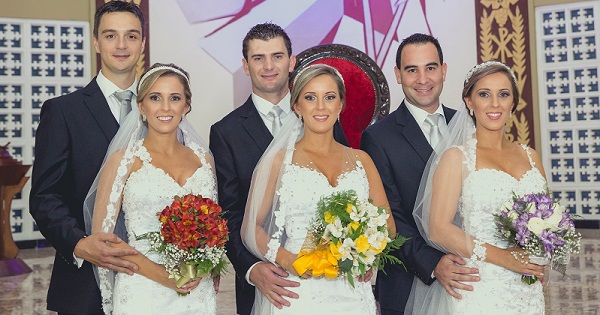 The ladies were led to the altar by their dad who had to walk back and forth to ensure he spends individual time on the aisle for each of these charming brides.

It appears that the wedding went on without hitch and the brides did not try switching places with her sister just to confuse their grooms, something they would sometimes do back when they were not yet married just so they can have a good laugh at their men’s expense. It is a good thing they had understanding boyfriends-turned-husbands who often see the humor in the switch.

Watch the video below. It does not have an audio but it was clear in the clip that the beautiful brides looked the same.

By the way, the wedding guests and each couple’s attendants wore different colors, depending on whose wedding they were attending. I find that really cool, actually.

“Sukob”, a Wedding Superstition in the Philippines

Did you know that this kind of wedding would be frowned upon in many areas in the Philippines, mostly because of a superstitious belief locally known as “sukob”.

According to the old people, siblings should never marry within the same year because their good fortunes will be split, instead of the blessings going to one couple who were getting married. Though many Filipinos still follow this tradition even without really believing wholeheartedly, a lot have already embraced modern thinking and go on double or triple weddings.