Home
Lifestyle
Relationship
The Most Awkward Break-Up Ever: During a Roller Coaster Ride!

A boyfriend who felt that his girlfriend was always forcing him to do things, including take the Goliath roller coaster ride at Six Flags Magic Mountain in Valencia, California, breaks up with her mid-ride.

It was clear even at the start of the video that the girl loved the ride but the guy was trying everything he could to cling to the roller coaster like his life depended on it. Of course, we could all argue that he could have chosen not to take the ride if he was truly afraid, especially because as an adult no one could really force him to do something he does not like yet it was also true that a guy would do anything (or try, anyway) to please his girl. 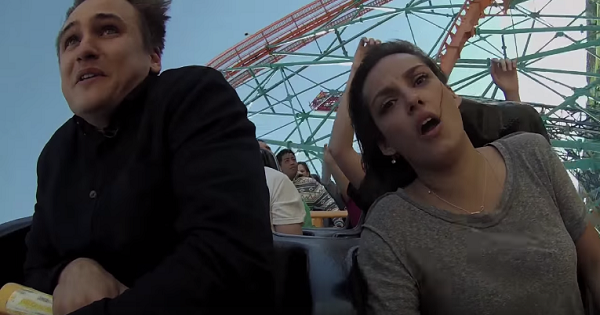 When the ride started, he began spewing nonsense things and blurted out how he wants to break up with his girlfriend because she was always forcing him to do things. Even though the girl was enjoying the ride and screaming, she caught some of the words and realized that he had just broken up with her in the middle of the roller coaster ride! The look on her face was terrible to see as reality began to sink in. She was no longer enjoying the ride.

This could go down the bowels of history as the most awkward break-up ever – for how could anyone break up with his girlfriend during a roller coaster ride, anyway? He’s crazy!

Watch the video and tell us what you think:

A roller coaster is a ride at an amusement park or theme park. It makes use of the railroad system of tracks and wheels but instead of tracks that lay flat on the ground or gently sloping up a hill like real trains use, the roller coaster could go on crazy loops and steep climbs to added thrill.

There are roller coasters that do not have loops or inversions while others have many of these scattered along the track!

The Steel Dragon 2000 is the longest roller coaster in the world; it can be found at Nagashima Spa Land amusement park in Nagashima, Kuwana, Mie, Japan. The ride was opened on Aug. 1, 2000 and continues to hold the record to date.

Meanwhile, true to its name and theme, the Formula Rossa at Ferrari World in Abu Dhabi, UAE is the fastest in the world. It can accelerate up to 240 km/h (149.1 mph) in just 4.9 seconds and races over a track length of 2.07 km (1.28 mi), according to Guinness World Records. Amazing!