Charged with lese majeste, Thanakorn, an auto-parts employee, apparently posted a satirical message about the royalty’s dog on Facebook . 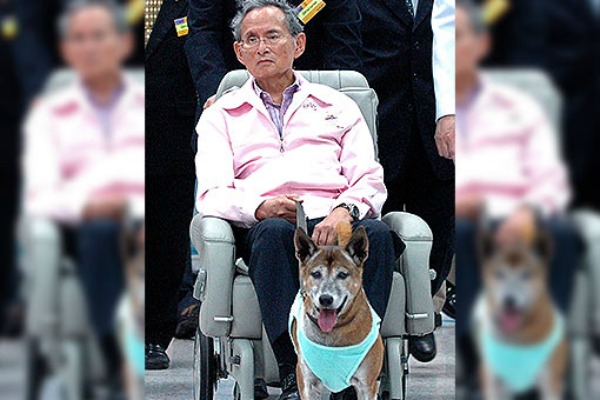 “There was a post including three photos on his Facebook page on December 6 with a message that satirised the king’s dog,” lawyer Pawinee Chumsri said.

In addition, Thanakorn is also facing lese majeste for sedition as well as computer crimes charges for clicking like and sharing edited photos of the King as well as an infographic on a growing corruption scandal involving the junta.

If proven guilty, Thanakorn may face up to 37 years in jail. Thailand, having one of the world’s harshest laws on royal defamation, punishes anyone convicted of insulting royalties up to 15 years in jail on each count.

Tongdaeng, a stray dog adopted by the King, is known for its loyalty and obedience. The dog has been used as a model as to how Thais should behave.

Known as Rama IX, King Bhumibol Adulyadej is the ninth monarch of the Chakri Dynasty in Thailand.

Dubbed as the longest-reigning monarch in Thai history, Adulyadej is also the longest-serving current head of state. Born on December 5, 1927 at Cambridge Hospital in Cambridge, Massachussetts in the United States, Adulyadej is the youngest son of HRH Prince Mahidol Adulyadej and commoner wife Mom Sangwan.

Following the death of his brother King Ananda Mahidol on June 9, 1946, Adulyadej  ascended the throne and was crowned King of Thailand on May 5, 1950. On April 28, 1950, Adulyadej was married to Mom Rajawongse Sirikit Kitiyakara with whom he has four children namely Princess Ubolratana Rajakanya, HRH Crown Prince Maha Vajiralongkorn, HRH Princess Maha Chakri Sirindhorn and HRH Princess Chulabhorn Walailak.