As his mother had put it, 8 years old is clearly too young to be encouraged by parents to pursue the love of his life yet David Spisak Jr. does not have long to live on Earth – and if it is one of the things that would make him happy until the end of his days, then his parents would certainly not deny him the right to fall in love and be happy.

David’s life has never been easy. He was diagnosed with leukemia at age 2 and has since been in and out of the hospital that his family has already lost count of how many times he has been admitted.

For most of his life, David has been isolated from people and he’s never been to many places because he is too sick to travel. Although his cancer went away for a while, it came back with a vengeance. It went on remission again, and got back again.

On his fourth bout with cancer, David and his parents have all chosen to stop treatments. With only a few months to live, David was allowed to do just about anything he wanted. He went back to school where he met 7-year-old Ayla. 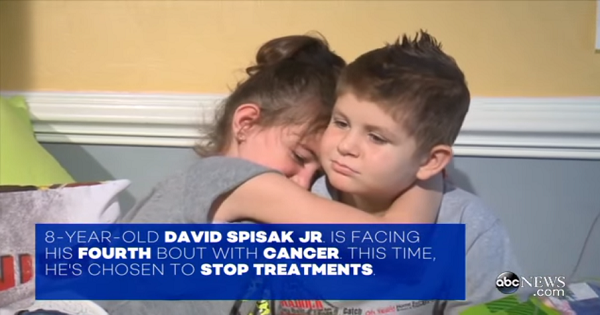 The two struck a bond and “fell in love”. The two went on a “date” at the bowling alley and later shared their first kiss.

Some people might think it was wrong to encourage such affection at very young kids yet the family only wanted David to be happy. David’s eventual passing would surely break Ayla’s heart but it is great that at one point in her life, she was able to be a ray of sunshine to a dying boy.

This is so heartbreaking…

When should kids be allowed to start dating? Well, different people have different opinions on the matter – and the youngest dating age might also affected by society norms where these individuals are living.

Typically, you would expect middle school and high school kids to be dating but there are many who start in their grade school days. There are some who even start as young as kindergarten; though that is surely not something you can take seriously, right?