A 17-year-old Brooklyn student’s poem submitted as an assignment turned out to be the latest Internet sensation.

Titled “Worst Day Ever”, the poem written by Chanie Gorkin was noticed by Londoner Ronnie Joice posted on  a bar wall. Inspired by what he read, he decided to take its photo and share it on Twitter.

Reports revealed that Gorkin wrote the poem last year based on Hasidic philosophy. It was very well-written that the poem qualified in the semi-final round of a contest in poetrynation.com.

Speaking to TODAY.com, Dena shared: ”I think it took her about an hour. She showed it to me and I was like ‘What? You just whipped this up like a recipe.’ I was pretty impressed.”

Gorkin’s family is hoping that the viral poem “will continue to bring good into the world, that people will be inspired to pay the good forward.”

Gorkin is currently unavailable for interview as she is volunteering at a summer camp till the end of August.

So what’s so special about Gorkin’s poem? You definitely need to read it from bottom to top to find out. 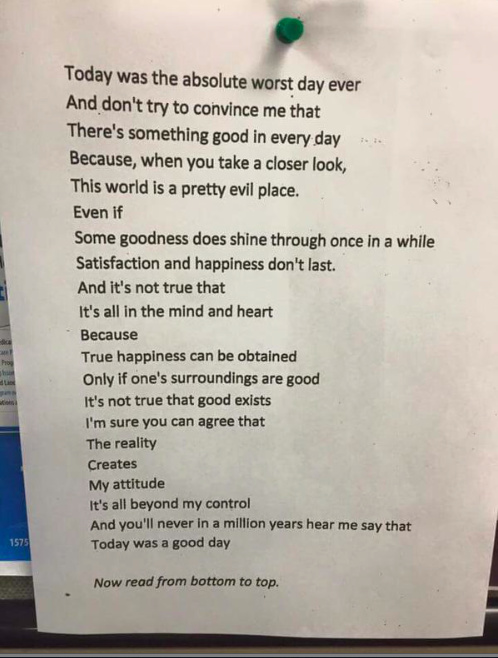 What is Hasidic Philosophy?

Also called Hasidus, Hasidic philosophy refers to the practice, teachings, and interpretation of Judaism as articulated by the Hasidic movement. It deals with a range of spiritual concepts including God, the Torah, and the soul and discusses religious elements of the movement.

Today, the term hasidus refers to the mystical revival of Judaism which was initiated by Rabbi Israel ben Eliezer  in 18th century in Ukraine.