A 14-year-old boy has gone viral on social media after a heartwarming photo of him sheltering an old man during a sudden hailstorm.

Ken Ingersoll who owns family-run restaurant Gracie’s in Vallejo, California said that his children occasionally work at the restaurant, especially on weekends.

On one such day, Ken’s son Elvis Ingersoll – one of triplets – was working at the restaurant when the sky suddenly opened up and pelted hail to the ground. Elvis saw an elderly man trying to cross the street but getting hit by hail.

Without second thought, Elvis grabbed an umbrella and rushed to the old man’s aid.

“The hailstorm lasted only four or five minutes at the most. He could not have gotten caught at a worse time,” the proud dad said. 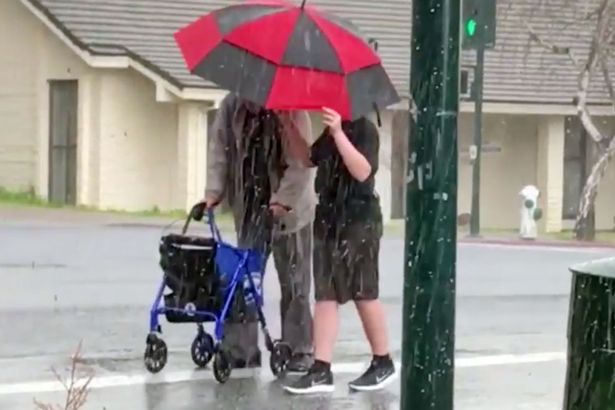 A regular customer, Rick Buenaventura, saw what happened and took a photo of the heartwarming to share on social media. The photo quickly went viral, much to their surprise.

“The attention that this getting is inspiring, especially with today’s media. Too often the attention goes toward such negative events which I think encourages people to do negative things,” the surprised but proud dad added.

“If Elvis going out there with an umbrella to hold over the man during a hailstorm encourages people to do similar acts of kindness, then we are all (winners).”

It’s truly amazing that such an act of kindness would gain much attention on the internet. We all hope that this would inspire more people to do good for others.

What is a Hailstorm?

A hailstorm is a storm of heavy hail which can be anywhere from 5 mm to as big as 15 cm! Hailstones can be irregular and could come clamped together. Getting hit by hailstones is definitely going to hurt.