Jeriemy Matias of Gov. Pascual in Malabon City, Metro Manila in the Philippines was just hanging out and skateboarding with his friends and twin brother, Jaym Matias, when he was hit by an 18-wheeler truck (PUA-788) on the leg. The other boys believe that he would have survived since only his leg was pinned under the truck but instead of backing out to release the boy’s leg, truck driver Roger Reyes allegedly drove over him and crushed his head!

In a post on Facebook, Jaym appealed for President Rodrigo Duterte to help their family find justice after Jeriemy lost his life due to the driver’s actions.

According to Jaym, he and Jeriemy were with some friends, skateboarding and hanging out. At 9:30 PM, they headed for home knowing that there’s a curfew and they could get caught. While Jeriemy was waiting for them at the sidewalk of an intersection, he was pinned on the leg by an 18-wheeler truck. 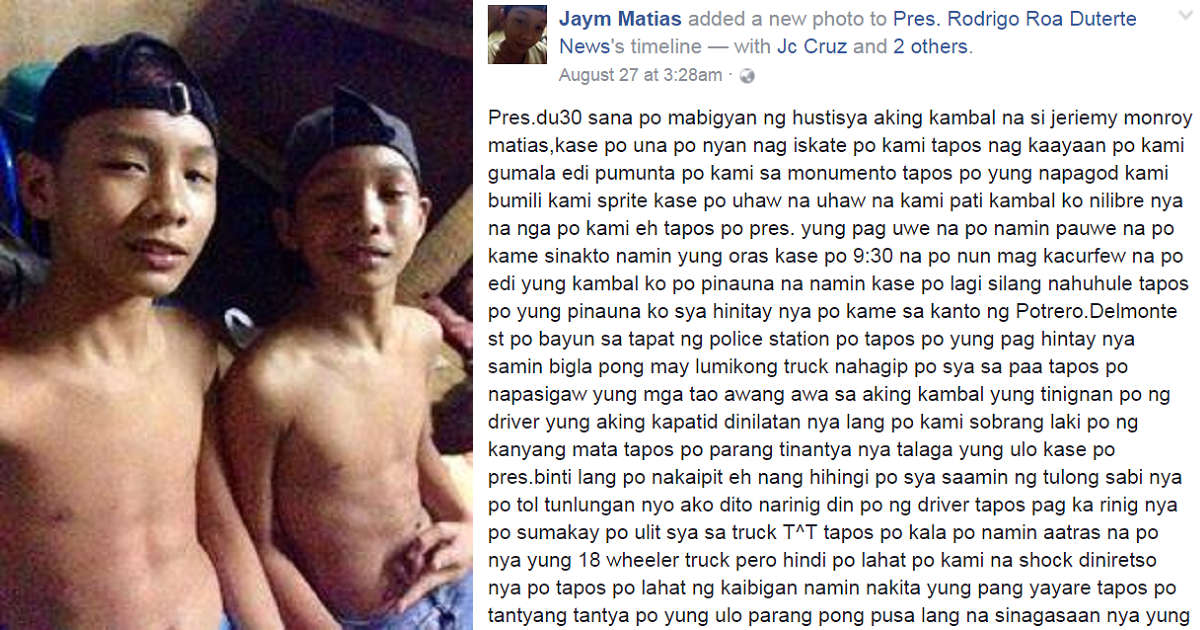 Jaym and their friends ran to help him. Jeriemy for help from the truck driver who had gone down to check on the boy. All the while, the boys thought that the driver was checking how he could back the truck off Jeriemy; however, much to the boys’ horror, instead of backing off, the driver moved the truck forward and hit the boy squarely on head, crushing him to death.

At that point, there was definitely no chance of him surviving at all – when he could have only lost his leg in the accident!

The incident angered netizens who called for the driver’s lifetime incarceration, payment of millions of pesos in damages to the teen’s family, and even paying for the teen’s life with his own!

The family is planning to pursue the case against the truck driver although they are also appealing for the president’s help so they can find justice for Jeriemy’s death.