Why is it that we Pinoys are so amazed with white guys who speak Tagalog yet we bash our own fellowmen for speaking English with an American accent?

This is the sentiment shared by Filipino-American Tim Tayag, a renowned standup comedian and travel show host. Tim grew up in the Philippines but spent a good time of his life in the US. Thus, he has experience in both worlds and could clearly share his experience in this matter.

Tim pioneered point-of-view standup comedy in the Philippines, according to Wikipedia. His material often delves into his life experiences in the Philippines as well as his travels in the US and other countries abroad. 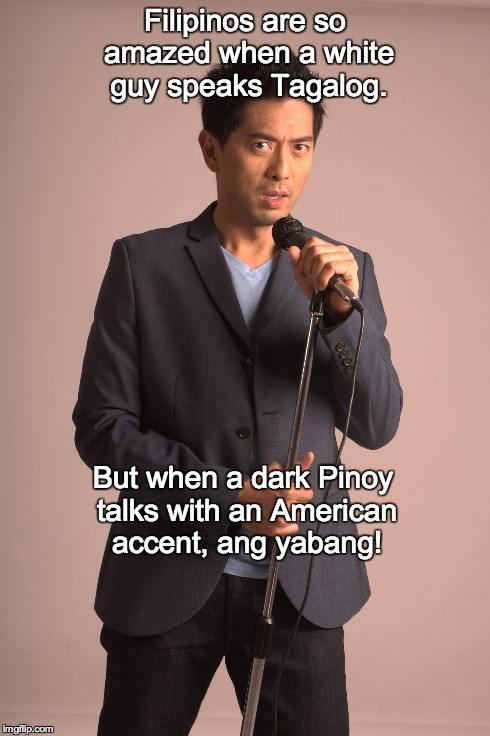 It might hurt a little (because it hit a nerve?) but his statement is true for most, if not all, similar situations.

How many times have we read news of white guys trying hard to be Filipinos, loving the Philippines, and speaking Tagalog? More often than not, news like these go viral because we are just so amazed at how these white guys love our country. It is so cute! …then the Pinoy pride comments begin to pour in…

That’s fine with me. After all, if these guys tried their best to speak a language they clearly were not programmed to speak, then we just have to applaud their efforts.

However, what I could not comprehend is how we tend to bash dark-skinned Pinoys who also made an effort towards learning the English language – and speaking it using an American accent (or any accent for that matter, ex. British, Australian, etc.).

With the advent of call centers across the country, you are bound to meet at least a dozen of these people. Now, why do we have to label them as ‘trying hard’ and mayabang (arrogant)? Aren’t they just adapting to the corporate world they are living in?

Is it really too hard for us Filipinos to admit that there are others who may not look like foreigners yet are able to speak like one? Hmmmm…perhaps this is just another face of crab mentality?

Personally, I think we should just be happy for these people. Stop hating. If they can speak better English than us, then great! These people are going to make foreigners admire Filipinos, right?