Staunch supporters of Davao Mayor and presidentiable Rodrigo Duterte believe that mainstream media are ganging up on him, especially after several series of negative reports have continuously been posted on leading online news sites in the country.

These netizens could not help but remark how many of the mainstream media and news sites are putting in a lot of effort to supposedly discredit the tough-talking mayor, especially after reports surfaced that he is now topping the latest surveys.

Of course, the barrage of negative reports was also caused by Duterte’s controversial remarks on some issues, including making a ‘rape joke’ in a recent campaign sortie, past mistakes like supposedly cursing the pope, and even his womanizing ways but many supporters could not help but notice how the news sites are repeatedly publishing various negative reports about Duterte and his actions, including supposedly creating different versions of the same report just so several would appear each day on netizens’ timelines.

Meanwhile, supposed bad remarks and negative issues about Duterte’s opponents are allegedly downplayed by these news sites and are buried under the weight of Duterte issues.

In the article posted by Halalan Pilipinas, Duterte was slammed for the rape joke, with the site noting that the presidential candidate has gained international attention in a negative way. 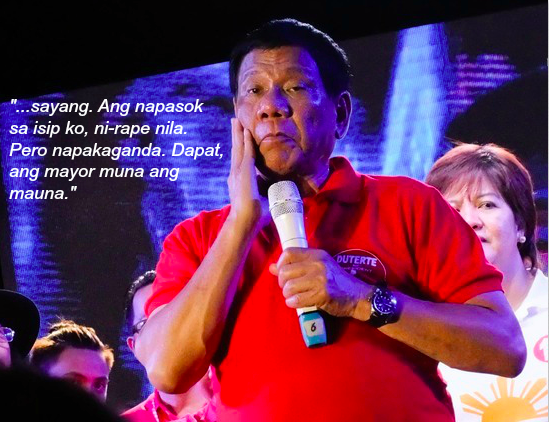 But while the article blasts Duterte, the comments section is more colorful, with netizens both slamming and defending the mayor.

One wrote, “Out of the abundance of the heart, the mouth speaks. Duterte’s heart must be full of rape and violence. And there are still Filipinos who will vote for him? What a country, what a people!”

Another also wrote, “The advisers of Duterte should tell him to shut his mouth off. Every time he talks it reveals his true nature, i.e., a person whose mind is like the mind of an animal.”

But there were many who defended Duterte, with one writing, “I don’t care about Duterte’s foul mouth, I can live with it. I need a president, not a saint to deliver services to the people. Duterte can do it. He did it before and still doing it to Davao.”

Another commented, “I’d rather entrust this country to Mayor Duterte who speaks like a street thug but was proven to be a genuine leader for several decades than those who speak like saints but were and are still blemished as thieves of the people’s money.”

But one went full blast on defending the mayor. This is what Janiwel Maghamil Sumalinog wrote in response to Halalan Pilipinas’ article:

You condemn Duterte’s admission that he was once a womanizer but you didn’t consider Erap as one, far more immoral for having multiple partners with multiple children, once a convicted plunderer and elected him to another post in your locality, feeding his family, possibly with people’s money.

You condemn Duterte’s foul mouth about his rape statement but you didn’t bother to react when they released Jalosjos, a convicted rapist and continues to rule.

You condemn Duterte’s way of justice which benefits the people but you are voting for Bongbong, the son of Ferdinand Marcos, the one who declared martial law – killed, tortured and raped hundreds if not thousands.

You condemn Duterte’s remarks because of pope’s arrival that caused super heavy traffic but you are listening to the sermons of priests who belong to a church painted with so much immorality.

You are bothered by Duterte’s plan on suppressing crime in 3-6 months but you are not even bothered by the idea that Binay’s son is in jail for graft and corruption and his whole family is enjoying the perks of the people’s money and the VP has ignored all the senate hearings.

You are intellectually curious about Duterte’s economic plan but you didn’t even bother to ask “What happened to the Yolanda funds?” and ask the then-DILG secretary about the rehabilitation of the affected areas, that once secretary, who also handled DOTC and caused so much trouble to commuters.

You are questioning Duterte’s capability to run this country because he is just a ‘mayor’ while you strongly believe that Grace Poe can make a difference, the once-Filipina, once-American daughter of action star FPJ, a neophyte senator whose tag line is to continue his dad’s legacy, legacy of what? Making lame action movies.

You are questioning Duterte’s leadership skills while you are fine with PNoy’s lame action when the Hongkong hostage [incident] took place and a single hostage taker killed 8.

You doubt Duterte’s relationship with the leftist and consider him as one but you never questioned PNOY’s insensitive actions after the SAF44, a bloody encounter initiated by Purisima to elevate his dirty status, and the lives lost in Hacienda Luisita and Kidapawan massacre.

Just stating facts. The guy is not perfect. No one is, even the greatest leader. But I will still vote for him because in return, he gets nothing. He is willing to risk his life not because to protect his interest but simply because he is a FILIPINO.