A student who plagiarized the documentary video for Cocolisap had the nerve to ask its creators to temporarily hide their original work.

Why go through all the trouble of asking the creators to hide the original work?

Well, first, the student said they did not have time to create their own work. Because of time constraints, he admitted to plagiarizing the documentary by passing it as their own. They removed the original credits to make it appear like they made the video.

Now, surely their professors might want to check whether they copied the video from another source. Thus, he asked the creators to temporarily hide their work until he and his group are able to ‘escape’ their adviser, coordinator, and panelist. 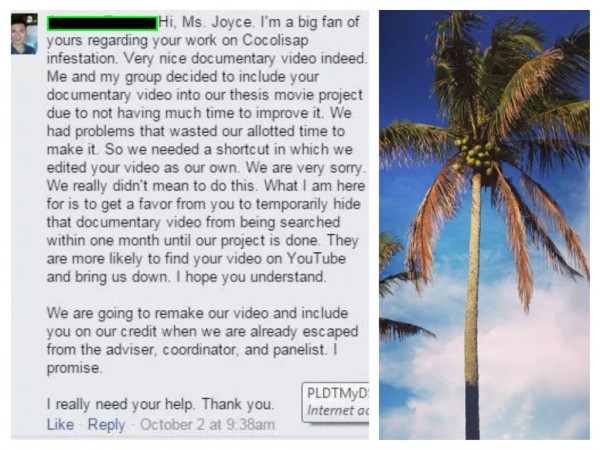 Afterwards, he promised they would re-create the video and give credits to the original creators.

What is incredible about this student is that not only did he have the nerve to ask the creators to take down the video, he even posted his request on the comments section of a photo posted on Facebook!

Naturally, many people reacted – none were pleased about his actions, reports The Dailypedia.

Of course, the creators denied the student’s request. The team leader of the original creators also gave a warning to the student to stop insisting that the creators take down the video, reminding him and his group that plagiarism is punishable by law.