It is sad how social media has shaped us into beings who adore getting likes and positive feedback from friends, beings who want to brag about the things we own and the places we visit on social media despite the fact that we could be deep in debt as we tried to look rich and popular!

Such a sad plight has affected a family in Indonesia.

A street vendor’s daughter had quit school because she was the only one in their classroom that didn’t have a smartphone. The teen felt embarrassed they her family was so poor they couldn’t afford a smartphone that she quit school and refused to go back unless her father bought her one! 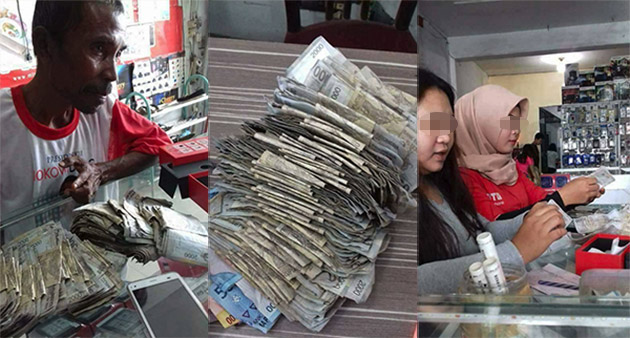 Considering that street vendors don’t really earn that much, her dad had every right to refuse the unfair demands of the teen yet he wanted her to finish her studies and earn a degree so she could have a better life in the future.

So, the poor man took out his savings and spent IDR 6M or $640 on the smartphone for his daughter. The cashiers spent a good amount of time counting the money as the man’s savings was in smaller bills.

While reports on the incident did not mention what phone the teen bought or whether she’s still in school now, we could only hope that she understands the sacrifice her dad had done so she could finish her studies despite the unfair demands she is making on him!

What is a Smartphone?

A smartphone is a mobile device that performs functions similar to that of a computer, including having an operating system, internet capabilities, and running various applications. It often has at least one built-in camera; although most smartphones these days have two, one to especially cater to selfies.