A stranger named Marty Burbank recently surprised everyone at Rio Vista Elementary School in Anaheim, California with a pledge to pay for the kindergartners’ college education.

This means that Burbank will be funding the studies of all 26 students when they study for 2 years at a community college and 2 years at a California state school – or the equivalent amount should they choose to study elsewhere.

In return, Burbank wants the kids to draw a picture or write an essay every year about what going to college will mean for them and their families.

“I’m a strong believer in visualizing your goals, and this way they’ll be thinking about this each year for the next 12 years.”

A lawyer and a Navy veteran, Burbank and his wife Seon, a Vanguard University professor, were both the first in their families to have the privilege of attending college. 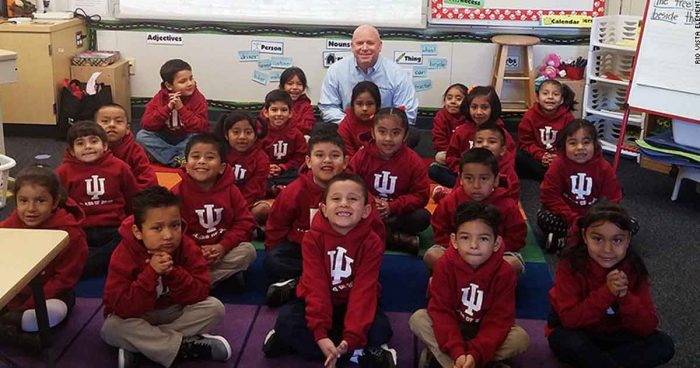 According to CNN Money, Burbank has already set up a private foundation where he will be contributing each year to ensure that there will be enough funds for all the kids. He estimates that the total cost by 2032 will be about $1 million.

All the students in the kindergarten class speak Spanish at home and most may not be able to afford college in the future.

“I thought, let’s take that financial burden away and maybe these kids will get more encouragement about going to college.”

To further motivate the children, the generous couple gave them IU sweatshirts and t-shirts with “Class of 2032″ printed on them.

Several months ago, Burbank was planning to buy a boat but he immediately changed his mind after hearing his pastor preach about charity while attending church one Sunday. “I thought that buying a boat at that point would be a selfish thing,” he confessed.

So the Burbanks decided to use their money for a noble cause. For a month, the couple was able to keep the donation secret between them and the school but word about it eventually spread. He, in turn, hopes that others would be inspired to follow suit.

“It doesn’t have to be a whole class. Picking up the tab for one child can really make a difference,” remarked Burbank.