Known for being a humble, kindhearted person, Camarines Sur Congresswoman Leni Robredo has once again captured the netizens’ hearts with a good deed caught on camera by Kaka J. Bag-ao, the congresswoman of the Dinagat Islands.

Bag-ao narrated how her conversation with Robredo was interrupted by a random street kid who asked them for food. Instead of turning the child away, Robredo invited him to the table, gave him her food, and chatted with him for some time.

Although the child’s arrival interrupted their dinner and led to Robredo ignoring her for a while, Bag-ao did not feel insulted because she saw beyond the gesture, cementing her image as a kind and honorable person!

Bag-ao was so touched by Robredo’s gesture that she posted candid shots of her friend chatting with the street kid on Facebook. She pointed out that Robredo is not just a smart and talented lawyer and congresswoman but also a wholly kindhearted person who is so simple, natural, and kind – without needing any “script”. 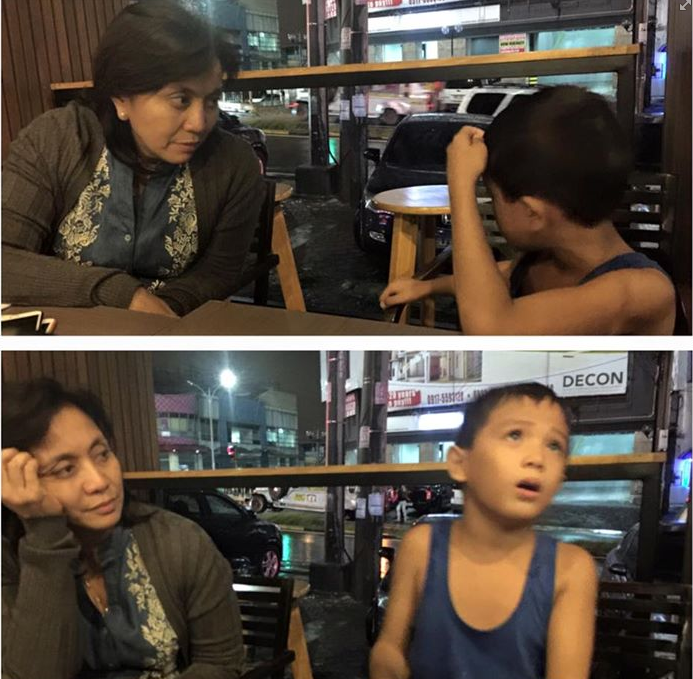 Although Bag-ao was referring to the “Tsinelas Leadership” attributed to her friend’s late husband, DILG Secretary Jesse Robredo, a number of netizens have pointed out the parallelism with Korina Sanchez’s “Handog Tsinelas” Campaign. Incidentally, Sanchez is the wife of the current DILG Secretary Mar Roxas who is running as president for the 2016 elections with Robredo as his running mate.

But whereas Sanchez’s Handog Tsinelas is about giving slippers to unfortunate children across the country through ABS-CBN’s magazine show Rated K, Mar Roxas campaign sorties, and various charity events, Robredo’s Tsinelas Leadership is something else.

For Robredo, the tsinelas is not just a type of footwear that the Filipino masses and people in calamity-hit areas often prefer to wear but also a symbol of simplicity. According to Energy Secretary Rene Almendras in his eulogy for the late DILG secretary, this Tsinelas Leadership not only showed his simplicity but also strengthened his ties with the masses and broke barriers between Robredo and his constituents.

“Tsinelas leadership” is the willingness to wade in the flood, willing to go where you normally do not go, to the most remote areas, just to be with the most disadvantaged people. We all know Sec Jesse rarely said no; that was why he was one of the most traveled Cabinet members.

We’re here in Malacanang, we’re here in Kalayaan Hall. Look around you. This place was not designed for tsinelas, and yet last night, and throughout most of the day, how many thousands of slippers came into this room to pay tribute, to pay homage and honor to Sec Jesse?

Naiilang lumapit ang nakatsinelas sa nakabarong. (Those who wear the tsinelas feel shy to approach those who wear the barong.) Leaders must be accessible to those they serve; that was Sec Jesse Robredo.

It seems that Robredo’s widow is continuing his legacy.

Bag-ao’s Facebook post just might look like a very timely material for Robredo’s VP campaign yet we can recall a number of viral posts showing just how humble she is, including her regular use of the public bus (Leni Robredo’s Photo While Waiting For Bus Earns Praise from Netizens) as well as using the backdoor to “escape” the red carpet during all the president’s SONAs (Rep. Leni Robredo Caught Using Backdoor Entrance to Escape SONA Red Carpet).