MANILA, Philippines- Over the past few days, photos of young students participating in anti-Marcos rallies have circulated on social media. Netizens have criticized teachers, school administrators as well as parents for allegedly forcing grade school students to join protests, saying that it is a form of child abuse.

But one student from St. Scholastica’s College Manila decided to speak up and shed light about her decision to join the anti-Marcos rally. 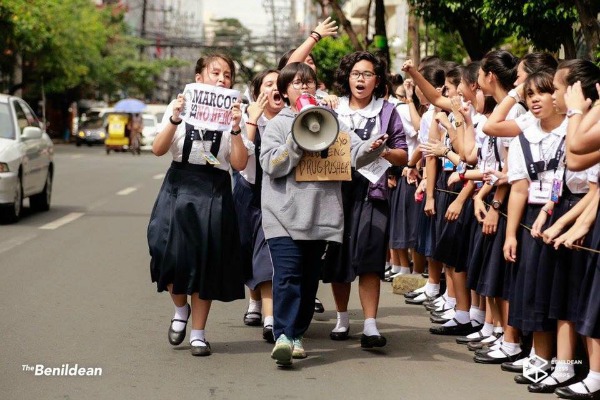 Shibby Lapena de Guzman, a young student from St. Scholastica’s College Manila, said they completely understood  what they were protesting against.

“Hello I’m the girl in the picture with the megaphone. Please do not underestimate the youth. We completely know and understand the injustice we are protesting against. Thank you, “ de Guzman wrote in response to a certain Abhie Arsenia’s allegation that they were subjected to child abuse.

In a separate post by de Guzman, she even warned those trying to silence the youth.

“Never ever underestimate the youth. We’re the future, After all. We are righteous protesters who know what they stand for (note: if they don’t want to take a stand, thats completely respected too.) But don’t try to silence us because we protest for the rights of our country’s development. We know injustice was done. We understand,” de Guzman wrote.

But in a letter sent to social media personality Mocha Uson, one of the administrators of St. Scholastica’s College Manila clarified that they released two different circulars addressed to the parents asking if they are allowing or not allowing their children to join the said noise barrage. The administrator emphasized that students who weren’t allowed by their parents to join stayed in their classrooms.