Studying to become a doctor is no joke at all – not only is it a very difficult series of courses, it is also quite expensive even if you study in the cheapest schools in the country! So, we are especially proud of those who pass the licensure exams for physicians, no matter their status in life – but we also recognize those who are poor yet were able to achieve their dreams of becoming a doctor!

We’re most especially proud of new doctor Karl Emmanuel Mercader who graduated from University of Perpetual Help System as he was declared the Top #1 in the March 2017 Physician Licensure Exams! What makes Dr. Mercader extra special is that he’s the son of a tricycle driver!

While we are not trying to belittle tricycle drivers and mean that their kids are not entitled to finish their studies, it is a well-known fact that tricycle drivers aren’t exactly rich. Most of them are only able to earn enough money to feed their family. 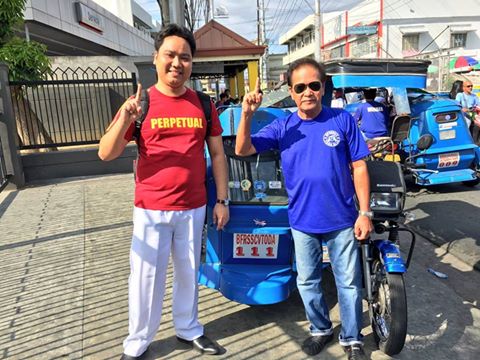 Thankfully, Mercader’s mother is a lawyer and his two older siblings already have a job which they used to help him in school. He is the third of five siblings.

According to Mercader, he was supposed to graduate in 2011 but due to financial constraints, he quit med school to work as a call center agent for a couple of years. With prodding from his dad and grandma who wished to see him become a doctor, Mercader decided to get back in school and finish his studies.

Before taking the licensure exams, his dad told him not to feel too pressured but to work hard so he could pass the exams. Passing the exams as top 1 was certainly something they did not expect but was truly a welcome surprise!

The school director was also impressed with Mercader’s performance, revealing that this was the first time in 21 years that the school had a topnotcher – and the top #1 at that! So, they are planning to give him a great incentive: a brand new car!