A soldier who moonlights as taxi driver earned praise from netizens after one of his grateful passengers shared a story of his kindness.

In an account posted on When in Manila, a disabled person named Poy Yumping shared how they met the soldier-taxi driver one morning while waiting for a cab in Taguig.

Together with his mother, Poy was waiting for a cab to bring them to the Philippine Orthopedic Center when the soldier’s cab arrived. They flagged him down but he told them he was already on his way to the garage as his shift has already ended.

Their dismay turned to joy when the cab driver, later identified as one Mr. Elnar, told them to hop in because he will give them a free ride up to his destination, which was only a short way from the Philippine Orthopedic Center. Because he can’t bring them all the way to the medical facility, the cab driver said he will give them a free ride instead. 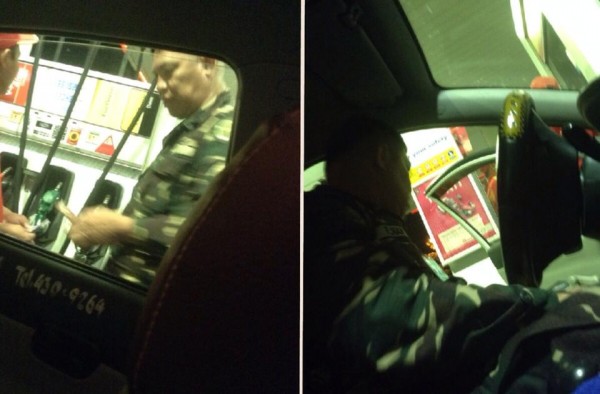 It was while chatting in the cab that they learned he is a soldier who moonlights as taxi driver to earn extra cash for the tuition fees of his children. He has 3 in college and 1 in high school plus an adopted daughter to support.

What is quite admirable about Mr. Elnar is that he was willing to give disabled Poy and his mother a free ride despite needing the money for his kids. When they went down at Mr. Elnar’s destination, their tried to pay the fare but the soldier refused. It was a great act of kindness that temporary erases bad memories of horror taxi driver stories.

We at RachFeed are hoping all taxi drivers will be as kind and honest as Mr. Elnar. We salute you, Sir!

Mr. Elnar’s story is not a first, certainly, when it comes to military and uniformed officers moonlighting as other workers to earn extra for their families.

It pleases us to remember the story of MMDA Enforcer Gonzales who sells bibingka to motorists so he could pay for the tuition fees of his kids. He was later praised and provided with assistance by no less than MMDA Chairman Tolentino after his story went viral on social media.

We hope a similar thing also happens to Mr. Elnar.