The Lair brothers, all six of them, are all used to dealing with boys – but how would they react to a baby sister? The answer is actually quite surprising but also expected…

Parents Cher and Stephen wanted to capture their boys’ reaction to a baby sister, so they took a video of each boy (2-year-old Knox, 4-year-old Shepherd, 5-year-old Houston, 7-year-old Sawyer, 10-year-old Campbell, and 13-year-old Jackson) welcoming his newborn baby sister.

As the eldest, Jackson felt a bit worried as he does not know how to deal with a girl sibling even if he is a pro at handling brothers. Campbell expressed excitement but admitted that he felt scared that she’s a girl. Houston feels worried that she would paint the whole house pink, especially because he hates pink as it is a “girl’s color”.

Sawyer is perhaps going to be this girl’s ultimate protector as he said he would join the police force to help find her if she ever gets lost; then he would lock up the culprit in jail for “a thousand years”. But Campbell is also going to be her protector, he openly admits so – and starts a speech about the future wherein she brings home a boyfriend…

She is surely going to grow up showered with love and affection by these tough guys but will also be a gem protected by six bodyguards. Whoever messes up with this tiny girl is going to answer to six protective older brothers! Good luck to this girl’s future boyfriends…

The Six Swans fairy tale is among the collections of the Brothers Grimm.

It tells the story of six brothers and a sister whose father, the king, unknowingly married a witch after their mother died. The evil witch queen turned the princes into swans but could not change the princess. Allowed only 15 minutes each night to become humans, the six swans carried their sister to a faraway place where their evil stepmother could not harm her.

There, the queen of fairies told the princess to knit a shirt of nettles, one for each brother; but must take a vow of silence or her brothers will die. The princess would gather nettles from the graveyard and it took her one year to make one shirt.

She was later accused of witchcraft and could not speak to defend herself. As she was about to be sentenced to death, she finally completed the shirts. She threw these to her brothers who transformed and defended her. 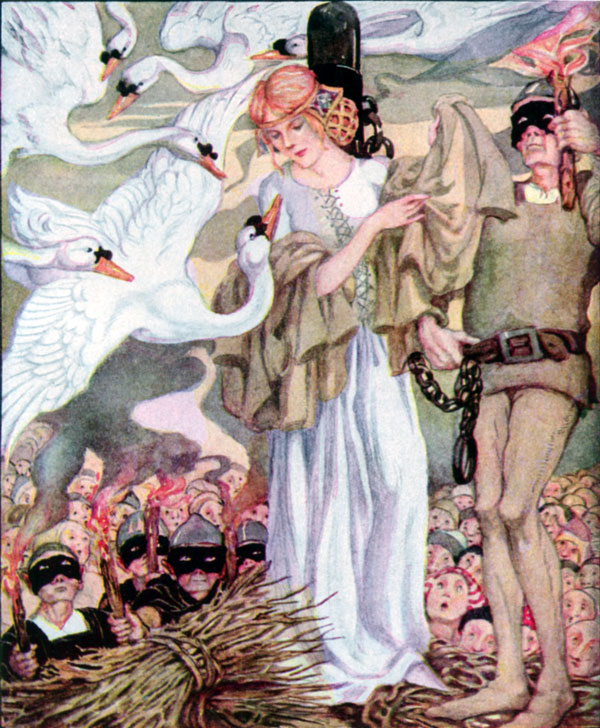