A foreigner of yet unknown nationality has become viral on social media after it was reported that he was begging for money in the streets of Dipolog City, Zamboanga del Norte in southern Philippines. According to a post on the Facebook page, Filipino Netizens, the photos were shared by a certain Castro Eugeene who was not able to ask for the foreigner’s name.

Castro shared the photos in hopes that someone could recognize and help the foreigner, perhaps even help him get back to his native country through his embassy.

A number of those who commented on the Facebook post mentioned that the foreigner should be turned over to local agencies such as the Department of Social Welfare and Development (DSWD); although the department surely has its hands full at the moment with Filipinos in need of help. Others suggested that someone should help bring him to the embassy; although the nearest one is hours away. 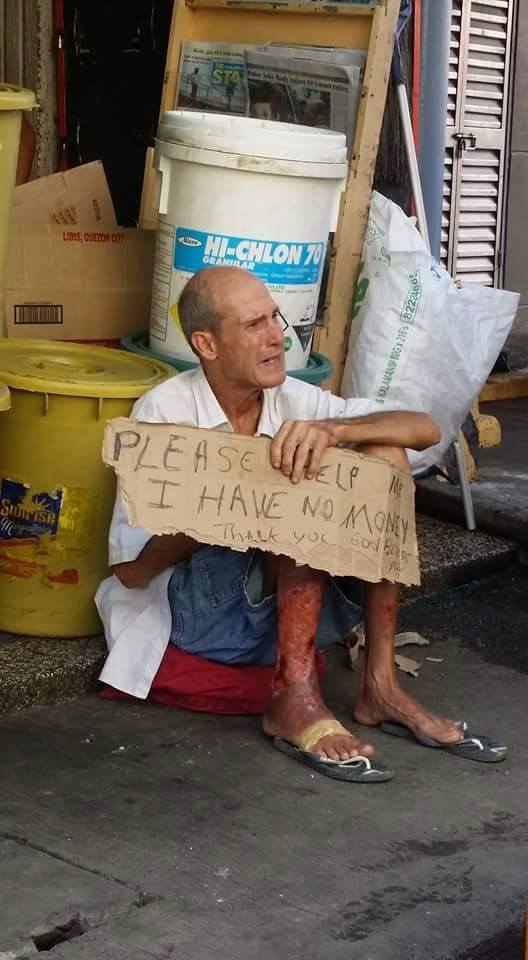 Many believe that this foreigner was a victim of a Filipina girlfriend/wife who left him after he ran out of money or got sick but others think he might be one of those foreigners who just fell in love with the country and came here for the attractions, not necessarily because of some woman; though it is a mystery how he lost his money and other belongings, if ever he was a tourist. Could it be that he was robbed?

Whatever the story behind this foreigner’s current plight, we hope that someone could really bring him out of Dipolog City and to the correct embassy he belongs to so the proper authorities could handle his situation. Several locals have confirmed that they have, indeed, seen him in the city.

Some netizens also shared his story to the US Embassy; although it has not been confirmed that he is an American.

Where is Dipolog City?

Dipolog City is the capital of the province of Zamboanga del Norte in the island of Mindanao, southern Philippines; it is also known as the “Gateway to Western Mindanao” and the “Bottled Sardines Capital of the Philippines”.