In his Facebook post on Tuesday, Oct 4, Pangilinan questioned the strategy of Duterte, which was implemented in Davao City for 24 years. According to Pangilinan, the president’s approach failed as almost 5,000 drug users and pushers in Davao City have voluntarily surrendered to authorities in July 2016, based on a report by Sun Star Davao. 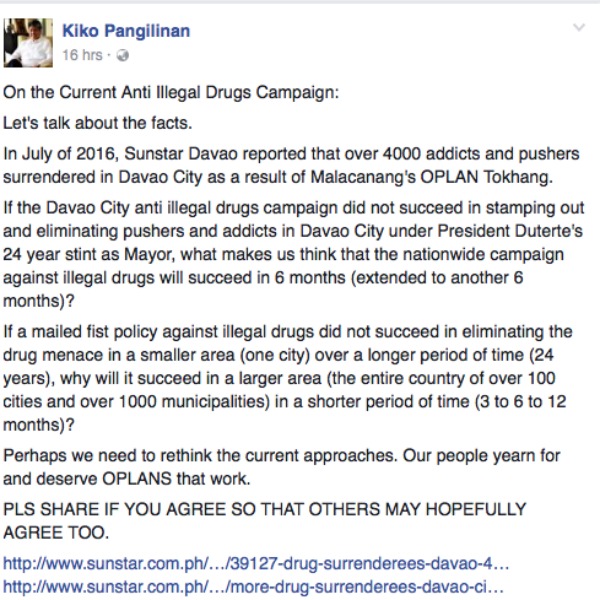 “If a mailed fist policy against illegal drugs did not succeed in eliminating the drug menace in a smaller area (one city) over a longer period of time (24 years), why will it succeed in a larger area (the entire country of over 100 cities and over 1000 municipalities) in a shorter period of time (3 to 6 to 12 months)?” Pangilinan wrote in his post.

Pangilinan suggested that Duterte rethinks the current approaches to combat the drug menace in the country.

Several netizens lambasted Pangilinan for his comment on Duterte’s anti-illegal drug campaign and even challenged him to present an alternative solution.

In one of the comments, Pangilinan wrote his proposed solution.

“Rehab for the addicts. Job generation and employment for the poor who earn a living from peddling drugs. Modernizing the justice system so that we punish more and we punish swiftly so that there will be fear and respect for the rule of law. When more are tried and convicted in a swift manner then we will see respect for our laws.”

Who is Kiko Pangilinan?

A Filipino politician who serves as the Senator of the Philippines since 2016 and previously served from 2001 to 2013 , Francis “Kiko” Pangilinan is the husband of actress and TV personality Sharon Cuneta. Pangilinan formed Judicial Executive Legislative Advisory and Consultative Council (JELAC)  in 2008.