The story of a guy who went from security guard to the company’s tech officer has gone viral, with many netizens praising him for his determination to improve his career.

Abdul Alim left home in 2013 to find a job in the big city, heading to Chennai, India, with just 1,000 rupees ($14) in his pocket. He spent most of the money on the train ticket. With no money and nowhere to go, Alim lived in the streets and roamed the city for 2 months.

He was lucky enough to land a job as security guard at Zoho Corporation, an Indian multinational company specializing in cloud computing, software development, and web-based business tools.

One day, Zoho senior employee Shibu Alexis approached Alim and asked for his name. The senior employee also asked him about his studies and whether he had any computer knowledge.

“Alim, I can see something in your eyes (sounds filmy I know),” Alim recalled Alexis telling him that day. 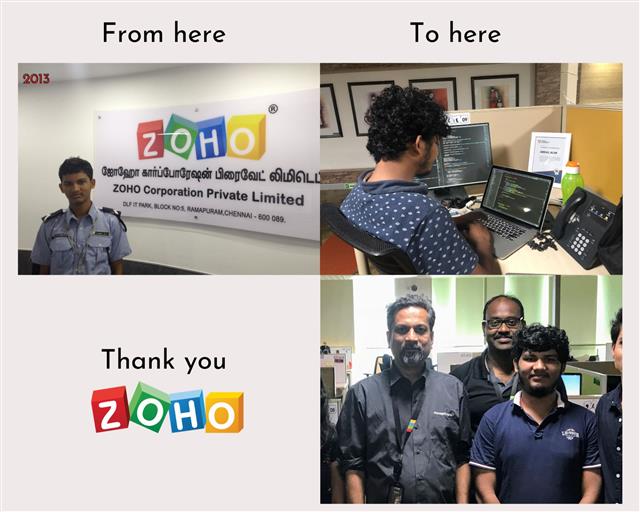 Somehow, Alexis saw potential in the security guard and offered to give him free lessons. Everyday after that, Alim would go to Alexis’ office after completing a 12-hour shift as security guard so he could learn about coding.

Around 8 months later, through Alexis’ tutelage, Alim was able to create an intuitive app that uses a user’s input and visualizes it. Impressed, Alexis showed the app to his manager who was also quite impressed. The manager arranged for an interview.

Alim was unsure whether he’d actually be interviewed. After all, he didn’t even finish college and had only learned coding from Alexis. But the manager was impressed by his talent and told him that the company doesn’t look at an employee’s college degree. Skills matter more.

Now the company’s tech officer, Alim thanked Zoho for the opportunity and Alexis for seeing beyond his looks. Without Alexis, he would probably still be just a part of the company’s security team.