A family’s joyful outing at the Steveston Fisherman’s Wharf in Richmond, British Columbia turned into nightmare when their daughter was dragged into the dirty waters by the male sea lion they teased earlier with pretend food.

The incident was caught on camera by Michael Fujiwara. According to witnesses, the family had been feeding the sea creature. The animal soon attracted much attention from the other tourists; although it was the family who stayed closer to the water and fed the animal.

Delighted at seeing a wild sea creature at the dock, Fujiwara took out his camera and began filming. As can be seen in the video, several of the tourists pretended to feed the creature, extending their hand out into the water even if they had no food to give the sea lion. 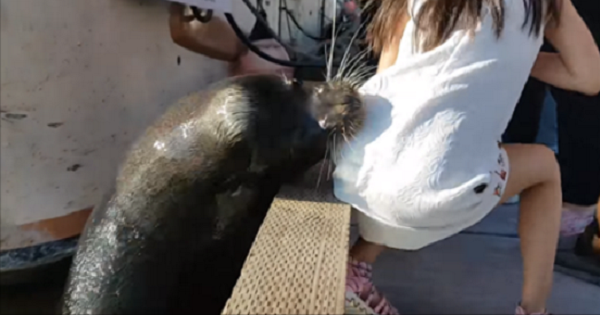 At one point, the sea lion lunges towards the girl’s face. It didn’t seem to be an aggressive move and the girl was quite delighted with the animal’s behaviour. But as they grew more comfortable with the animal, the girl sat on the edge of the dock to get closer but the sea lion suddenly grabbed her dress and dragged her into the water.

An old man, believed to be the girl’s relative, quickly jumps into the water to save her. Thankfully, the sea lion had let go of the girl and the water didn’t seem to be too deep. Other people rushed to help them, including Fujiwara.

The girl was visibly shaken by the experience and all went but was otherwise alright. This surely taught them a lesson not to go too close to a wild creature – even if they look cute and cuddly.

Sea lions are carnivores and eat food such as fish, clams, crabs, and squids. They don’t chew their food as most are just swallowed whole.