On September this year, Daniel Roark from Gloucester, Massachusetts found a treasure while scuba diving at Barracuda point in Playa Del Carmen in Mexico.

No, it wasn’t the “Heart of the Ocean” necklace. Roark actually discovered a wedding ring.

Through the social media Facebook, Roark is attempting to find the owner of a lost wedding band he found while exploring the ocean. His Facebook campaign has gone viral getting almost 100,000 shares as of writing. 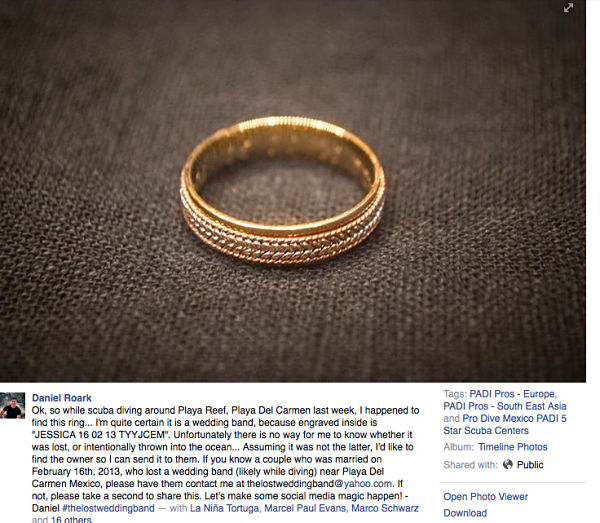 According to the scuba diver, he thinks that what he found is a wedding ring since “JESSICA 16 02 13 TYYJCEM” is engraved inside. However, he has no idea whether it was lost or intentionally thrown into the ocean.

Although Roark’s post has been shared in various social media sites, they still haven’t found the owner of the ring.

At least Roark has clues about the owner. In his post, he mentioned:

If you know a couple who was married on February 16th, 2013, who lost a wedding band (likely while diving) near Playa Del Carmen Mexico, please have them contact me at thelostweddingband@yahoo.com.

Since wedding bands are very tiny, it’s not unusual that someone can lose his or her precious gem. Fortunately, there are lucky ones who have found their rings after years of losing them. Published in Neatorama, these stories of people who lost and found their engagement or wedding rings will make you believe in fate.

A year after Donna Claver tied the knot, she accidentally lost her engagement ring into their toilet bowl. As the ring got stuck at the bottom of the toilet, Donna and her husband Terry tried their best to get it but failed to do so. Eventually, the two gave up their quest for the lost ring. Years later, the couple moved to another home while new owners occupied their old house. Perhaps it was fate that brought Terry to be at the exact moment when the new owner tried to throw the old toilet in trash. He volunteered to throw it out for them. Of course, he actually brought it home and broke it using a sledgehammer. Almost 36 years since Donna lost her ring, Terry finally recovered it.

Sixteen years after Lenna Pahlson lost her ring in their kitchen counter sometime in 1995, she found it from the most unusual thing you can think of: a carrot. So how exactly did it happen? She explained:

We thought maybe it had fallen in to the compostable food bin. Perhaps it ended up in compost that was spread over the vegetable patch later.

In 1976, Anthea Capewell lost both her wedding and engagement rings while closing her garden gate. Despite Anthea and her husband’s efforts to find the two bands, they only found her engagement ring. Who would have thought that 33 years after she lost the ring, her old neighbour would call her up to to tell her that the ring has been found underneath a hedge near their property.