A woman who’s had enough of her cheating husband decided to ‘sell’ him on Carousell, an online marketplace that’s popular in Malaysia and several Asian countries. But aside from ‘selling’ her husband, she also offers his mistress for ‘rent’. LOL.

The angry woman, identified through her Carousell username as Hanz Letty (we doubt that’s her real name), posted a photo of her husband, selling him for a very cheap price of RM0.01 ($0.003) in the ‘used’ category under Women’s Accessories. Ouch. 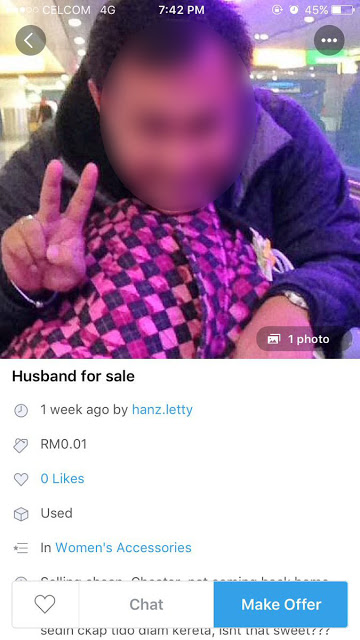 Under the description box, she wrote, “Selling cheap. Cheater. Doesn’t come back home to family. Loves clubbing. A womaniser. A drunkard. Sleeps around but makes up a sob story by claiming he slept off in the car; isn’t that sweet? Ngaww.”

We hope that makes it easier for her to sell him… LOL.

But the woman wasn’t finished yet. Aside from selling her cheating husband, she also offered his mistress for rent! Although it was a bit puzzling that she’s worth more than the guy as the scorned wife is ‘renting’ her for RM0.05 ($0.01). Perhaps that’s to make her more ‘saleable’? 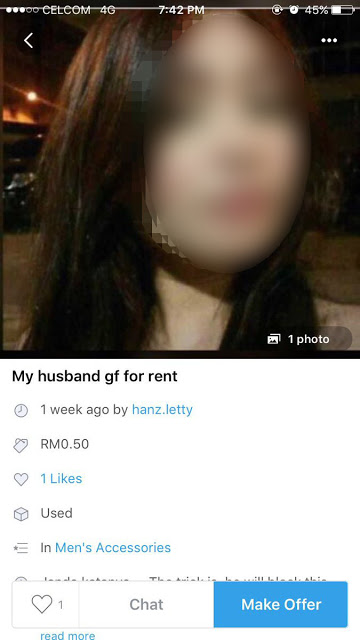 “A widow, he said. The thing is he blocks this girl on his phone when he returns home. He also said that this girl owes him a sum of money and, currently, he’s looking for this girl, which is why he had called her several times. However, the funniest part is that the girl didn’t block him but he did.

Also, earlier, he said that he calls this girl several times, right? But, her number is not in his phone call history at all. This is hilarious. Not only that, he also said that he tried to call her to warn her that she can no longer call him. Then, he tried to justify his actions by claiming that I do that too but I’m not an idiot; instead, you are afraid of your own shadow.”

We aren’t sure if there were any takers for these two but this should serve a lesson for anyone to never cheat on their loved ones! You just might find yourself getting ‘sold’ on some online store! LOL.