Home
Entertainment
How Do Scammers/Spammers Get Phone Numbers?

It is annoying how spammers and scammers constantly send us text messages, in hopes that we might be too gullible to realize they are actually the ones who would benefit from the awesome deal they are offering.

I can still remember the very first time I was ‘scammed’ via text. Back in the day when text messages were not yet a big thing (note to younger generations: we rarely text in the 90s…YG reaction: what??? Are you serious???) LOL

A cousin sent me a message, asking me to reply with “2”. I readily complied but was puzzled when I was told that I had just sent him P2 load. He later laughed at me for being so gullible and told me not to be ‘scammed’ again.

On a side note, it wasn’t really a big deal because I absolutely love this ‘scammer’, P2 is not really a big thing, and it was more of a joke at the time because people still didn’t know what pasaload is.

So, in the spirit of practical jokes, I also sent the message to several of my friends – some of them also sent me P2 [sweet revenge LOL]. Mind you, pasaload was still largely unknown in those days.

But you have to remember that text messages at the time cost P1 to send – and only a few of my friends were actually as gullible as me. It was the telco network who eventually had the last laugh with the practical joke. 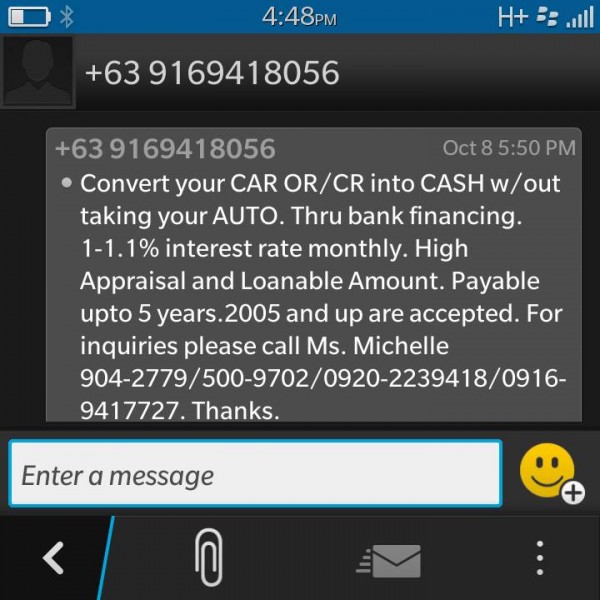 That was sometime in the 90s or early 2000s yet there are still so many scammers these days. The amounts have gotten an upgrade, actually. Unlike the P2 we scammed our friends then, crooks are asking pasaload ranging from P20 to higher amounts such as P300, P500, or even P1000!

Of course, you can’t pasaload amounts unless you have lot of credit on prepaid but postpaid numbers can quickly send those without hitch. If you are a postpaid user, replying to these scam texts could give you bill shock.

Aside from load scammers, there are also plenty of others who try to scam you with promises of winning some kind of lottery or raffle promo you didn’t even join. Many people willingly sent the scammers thousands of pesos in ‘processing fees’ and ‘taxes’ so they can get their P1 million prize or new luxury car.

Just this afternoon, I received a message from a spammer/scammer (?) who asked me if I wanted to apply for a loan at Phil. Bank of Communication (Pbcom). I honestly don’t know how this Dennis got my name and number! I am so used to receiving similar spam messages, yet this is the first time that someone addressed me using my name. 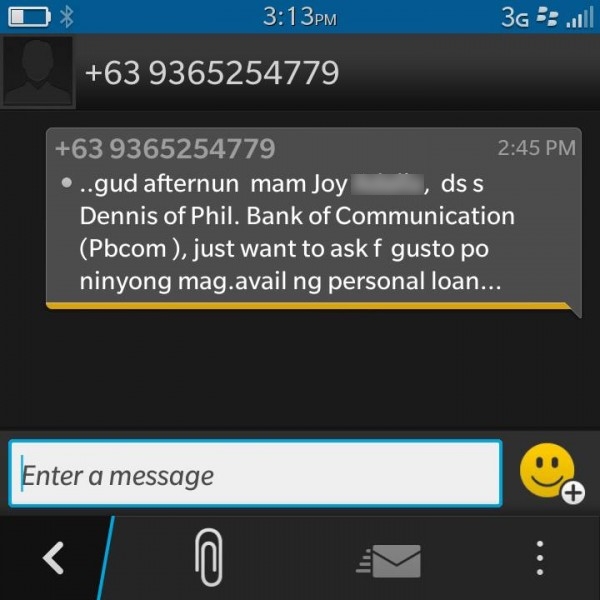 Where the heck do these people get these information, anyway?

I am quite sure it was not from my Facebook profile because i disabled my phone number there. Though there’s always this possibility that the site can be hacked and the phone numbers made available for techie people to see.

Dancing at the back of my mind is the question that someone at the telco could be behind these massive spamming – though that would be crazy, right? Perhaps there was a leak or a hack that revealed customers’ numbers? After all, though I have always received scam messages while I was still using prepaid, I only received the spam messages from ‘companies’ when I switched to postpaid. However, that just sounds quite crazy because the telcos had supposedly penalized those who are spamming their consumers.

Filling out online forms is another possible source of information leak. I do enjoy online shopping from time to time, so it is possible that someone snatched tidbits of information from forms, right?

Of course, there is always that possibility that these people were just randomly sending messages to numbers they just make up. After all, telcos are now offering unlimited texting options to consumers.

These are just the four reasons I could think of. I guess we really have to be extra careful next time we fill out forms on the web or do anything that might expose our numbers to these crooks.