MANILA, Philippines- Online scammers utilize a variety of techniques to trick people into giving their hard-earned money. In this latest modus operandi, scammers use the name and bank details of online sellers to get money from victims.

Ann Krista B. Calderon, an online seller who was almost victimized by a scammer, shared her experience to warn netizens about the new modus operandi. Calderon, who was selling books online, apparently gave her bank details to a scammer, who pretended to be interested in buying her products. 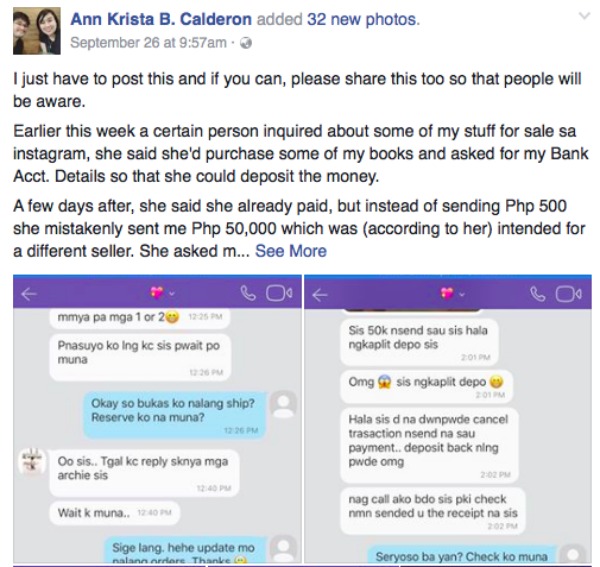 The scammer then informed her that she has settled the payment for the books which cost P500. However, Calderon was told that the scammer mistakenly sent P50,000 to her bank account, which she claimed was intended for another seller she identified as Krissia Angelique Gannod.

Calderon was then instructed by the scammer to deposit the extra amount to the bank account of Gannod.

Unknown to Calderon, the scammer was only using her to steal money from another person. Apparently, the scammer gave out Calderon’s bank information to the victim, who then deposited money to her account. It turns out, the scammer just used Calderon’s name and bank details and was trying to trick Calderon into sending the amount to Gannod’s bank account.

But good thing, Calderon was able to research first. She later learned that Gannod was a scammer through online research.

Calderon then shared the story on Instagram in the hopes of finding the real owner of the money sent to her bank account.

“I found a scam related post which included my name in it. I contacted the “person who posted it and turns out, she too was a victim of this scam, she doesn’t own the money as well, she was also “mistakenly sent” a certain amount of money that was (according to the scammer again) intended for me and that’s why the money ended up with me. The money has been passed on to two people excluding the owner before it could reach the scammer (which it didn’t of course), to make it harder for the victims to understand what was going on,” Calderon wrote in her Facebook post.

Fortunately, Calderon was able to track down the real owner of the money with the help of the manager of involved bank. She warned netizens to be very cautious when transacting online.

Calderon added: “If you receive an unexpected amount of money in your bank accounts, never ever deposit it to just anyone who claims to own it, let them file a complain at the bank instead.”

What is an Online Scam?

Online scam or Internet fraud is the use of Internet service or software with Internet access to deceive victims or take advantage of them, usually by identity theft.