Netizen Ian Del Yong Caballero was surprised after his Globe SIM card went dead all of a sudden. After calling Globe’s customer service, he was surprised to learn that someone processed a SIM card replacement for his account a few hours earlier at GLOBE’s North Edsa store.

Thinking it was just a typo error of sorts wherein the Globe store mistakenly processed his account by mistake, he did not really think much about it until he realized that someone has taken over all his accounts.

He is using his Globe mobile account number for SMS recovery option and it appears that the person who processed the SIM card change was able to access his accounts, including his emails and his bank accounts!

It only took the culprits a few moments to access his accounts and make fund transfer from his BDO bank account amounting to P48,000! 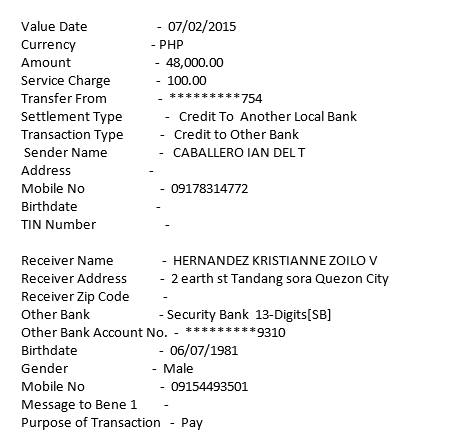 The money was transferred to the account at Security Bank of a certain Kristianne Zoilo V. Hernandez; though there is a possibility this other person might be just another victim whose account was hacked by the culprits. Caballero would later add an update stating Hernandez and his girlfriend messaged him, claiming they were also victims.

After personally going to the Globe store to settle the matter and to obtain the CCTV footage to identify the culprits, Caballero was disappointed to later learn that it was against the company’s policy to hand him the clip as the matter was an “internal” issue and that if he really wants to obtain a copy of the footage, he must go through the legal department.

As of 10:00 PM, July 5, 2015, the matter has not yet been resolved and Caballero is still working with BDO to retrieve his funds as well.

These days, online or internet banking is one of the most convenient ways to manage your money and bank account yet, as Caballero’s experience showed, it is not fool-proof. The banks are using plenty of security tools to make sure their customers’ accounts are safe yet much still has to be done to ensure that users’ accounts are not hacked.

Still, many would argue that the benefits of online banking far outweigh the risks – and everyone just has to be vigilant at all times to ensure safety at all times. As Caballero pointed out based on his experience, do not use your postpaid account as a recovery option for all your accounts or better yet, make sure your mobile company has to call you first using another pre-designated number just in case someone, even you, attempts to have your SIM card changed.