Another OFW working in Saudi Arabia is making waves on social media in a somewhat negative light, for allegedly posting lewd videos and sexy photos on Facebook – things that are prohibited under the Sharia Law of the Kingdom.

Coolbuster.net shared the post of one Daisy Quezon San Miguel, the ‘tipster’ who informed the public about the alleged actions currently being undertaken by the Ministry of Interior to the Committee for the Command of Virtue and the Prevention of Vice, Kingdom of Saudi Arabia, to catch the OFW. 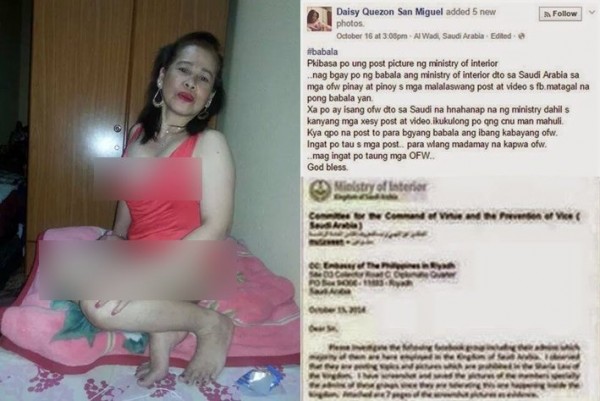 We’re wondering, though, how Daisy had gotten hold of the Ministry’s alleged letter. Anyway, she shared 4 photos of the OFW, identified by other netizens as a “Charmine Chou” whose Facebook page shows several sexy photos.

Another Facebook account surfaced, this time claiming that Charmine was just a ‘case study’, that she was posting those sexy photos for a certain Suzy Bautista who was supposedly researching about human emotions and social media.

Bautista provided lengthy ‘explanations’ to refute the claims that Charmine could be jailed in Saudi because of the photos she posted on her page. Coolbuster shared several of these ‘explanations’ in a bid to shed light to what Charmine has allegedly been doing in Saudi. Read the full account of the ‘case study’ here.

It is hard to believe, though, that it was all a ‘case study’ and that Saudi won’t act against the OFW as claimed by Bautista, because 1) Saudi authorities could not prove the photos were taken within the Kingdom and 2) it was posted on Facebook.

If it were truly a case study just like Bautista claimed, did she just put Charmine’s live in danger so she could do the research as part of her masteral studies’ requirements? She said her professors and lawyers were consulted before this was done – but if they were just looking for people’s reaction on lewd photos, shouldn’t they have picked another nation that doesn’t have super strict laws against nudity than Saudi Arabia? Tough.

We’re truly hoping that ‘Charmine’, whether ‘fictional character’ or ‘case study, won’t suffer any harsh consequences because of Bautista’s actions.