Model/Fashion Blogger Anna Moskvicheva was on her way to a photoshoot in the town of Mirny, Russia where her aunt lives but heavy rains prevented her from getting there – because the huge potholes on the roads were filled with water.

Realizing that she could do something to protest the poor road conditions in their region and also raise awareness that might bring change in the area, she decided to proceed with the photoshoot right on the road of her own city, Saratov.

Wearing a Baywatch-inspired red swimsuit and a wide-brimmed hat, Moskvicheva posed on an inflatable flamingo on one of the largest potholes near her home. 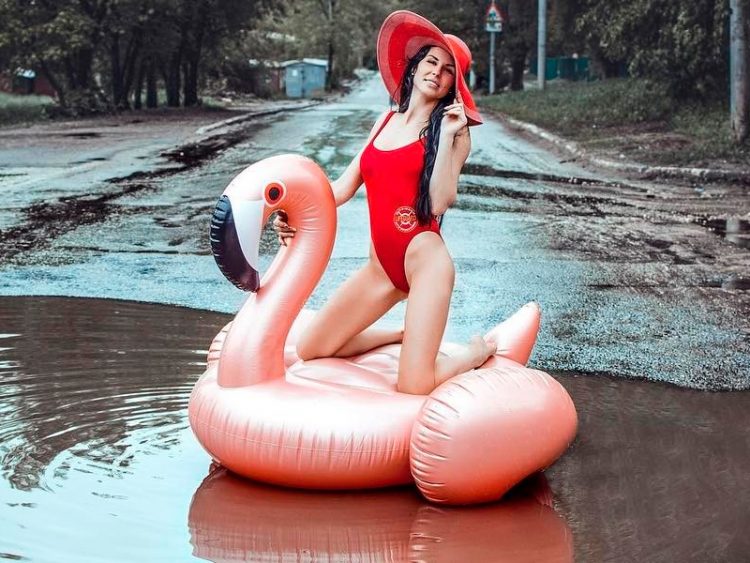 Many of those who passed by showed their appreciation while the group of professionals took several snapshots of the gorgeous model.

Moskvicheva posted the photos on social media – and was quite amazed at the results. Her photos went viral within minutes and was soon posted not just on social media sites and online web pages but also in major newspapers across Russia!

Many people congratulated Moskvicheva on her advocacy, saying that her unique way of protesting these potholes has certainly taken Russia by storm – and we bet the roads will get fixed soon.

The model told reporters that she thought about the potholes photoshoot as a way to combine business with pleasure; she was most certainly glad that she achieved the results she wanted.

But many didn’t take the photos seriously. While Moskvicheva’s purpose was on a more serious note and was only done in that sexy photoshoot to catch attention, others made a joke out of the photos.

One netizen joked, “When you want to go to the beach, but you can’t afford it.” LOL.