Can you imagine spending a Php100,000 in drinks and food for 22 people? Well, that sounds quite expensive, right? Now, what about Php1.2 million? Definitely outrageous!

But a group of 22 people did just that –and the receipt of the payment made by the unnamed rich guy has been making rounds on social media after this was posted by someone who apparently works at the restaurant where they made the rather grandiose celebration.

Whoever this rich guy was, he just spent close to Php1.2 million on food and drinks – with the exact bill amounting to Php1,199,855.36. Netizens were practically shocked over this huge amount, considering the group was only comprised of 22 people – what could they have eaten that the bill would be this high, anyway? 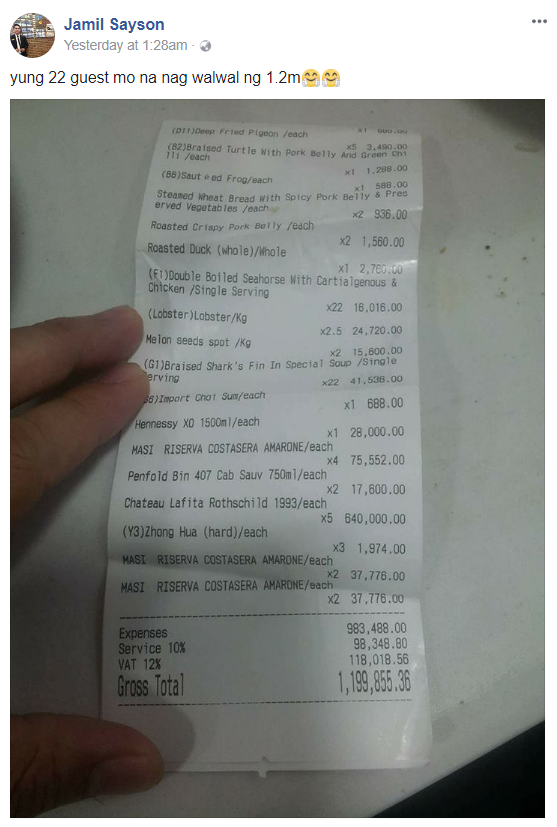 In the post shared by Jamil Sayson, the receipt shows several exotic food the group ordered. While roasted duck as well as lobster might not be so exotic for your taste, you might be surprised at the other items this group ordered, including sautéed frog, braised shark’s fin, and double boiled seahorse!

Can you believe that?

While we can’t confirm whether the shark’s fin and the seahorse were authentic, the price tag alone might give you a clue that these were for real.

But the group didn’t just splurge on exotic food, they also indulged in vintage wine.

Among the ‘cheapest’ ones they picked is the Masi Riserva Costasera Amarone which costs Php18,888 per bottle; they ordered 8 bottles.

The group also ordered a bottle of Hennessy XO, with the cognac costing the rich guy another Php28,000. 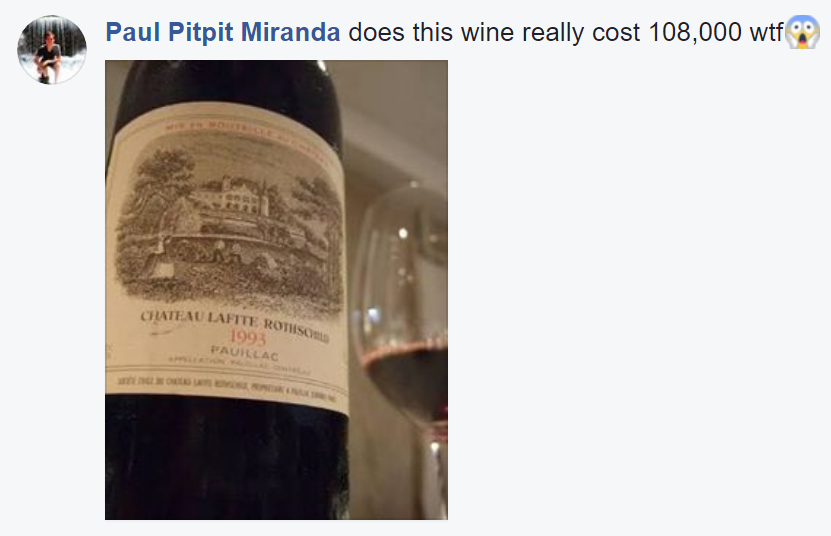 But the shocker on the bill is the vintage wine that costs Php128,000 per bottle. It turned out the group had ordered 5 bottles of Chateau Lafite Rothschild 1993, setting them back a total of Php640,000 just for that drink alone!

While the post shocked a lot of netizens, many made jokes about it. One joked that this group is surely friends with Xian Gaza while others pointed out the ‘hilarious’ names of the exotic food.

Others were more serious, saying the amount this group spent on food and drinks in one night could have fed thousands of homeless people for weeks or could have gotten this guy a new car, even a house. Some also said they should have used the money to buy a restaurant and eat all the food there so they can have a business while also enjoying the food!