With Halloween getting nearer by the day, a lot of scary tales and urban legends have resurfaced to scare us all. But in this modern age, do we still feel horrified by these tales or do we simply laugh at them, believing they have not really happened in real life but were merely products of some people’s overactive imaginations?

Well, different people have different opinions about this matter; thus, we’ll let you decide whether you think the following photo is real or hoax: 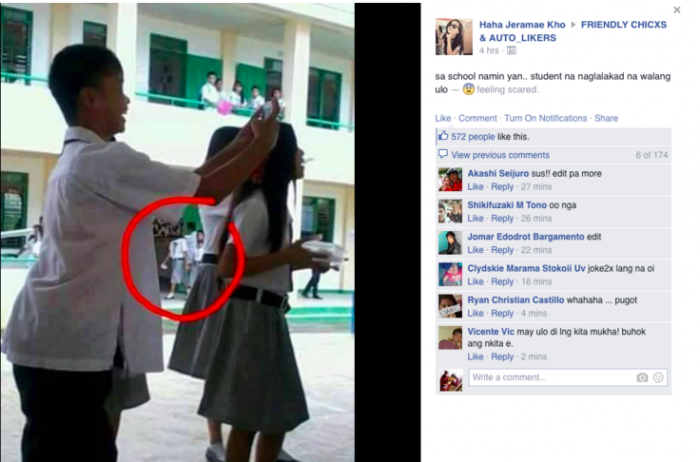 According to The Dailypedia, a girl named Jeramae Kho of Talamban, Cebu City was the one who captured the image and shared it to a Facebook page where it quickly went viral because of the mystery that shrouds the photo.

The snapshot shows several students in the foreground, seemingly having a good time watching other students – and one was even taking a shot or video of whatever it is they were enjoying. This supposedly happened while they were taking their lunch break.

In the background, however, is an image of what appears to be another student of the school, walking with other students, but she did not have a head! Did Kho just capture a ghost?

A number of netizens begged to differ, however, saying Kho surely edited the photo and posted it on social media for attention or to make the false snapshot go viral.

Well, as I’ve already said earlier, I would let you decide on the matter because I am no expert on ghosts or any editing software…

According to Wikipedia, “Social media is computer-mediated tool that allow people to create, share or exchange information, career interests, ideas, and pictures/videos in virtual communities and networks.” Examples of social media include Facebook, Twitter, the now defunct Friendster, MySpace, and many others.