A carcass of a gigantic oarfish was recently discovered in the Philippines just this month. Found in the beach of Pantao, Libon, a town in Albay province, the massive fish “measured 4 meters and weighed 50 kilos,” according to a report by local news website Rappler.

Photos of the oarfish started making the rounds on social media after they were originally uploaded on the Facebook page of Albay Governor Joey Salceda. The creature captured the attention of fishermen and beachgoers in the area due to its unusually large size. 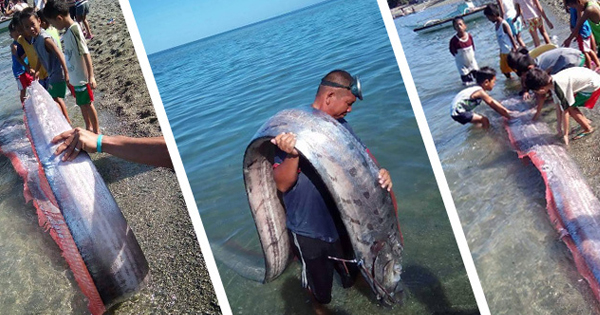 The giant oarfish has often been linked to myths and urban legends such as sea serpent sightings.

More Facts About The Giant Oarfish

Also known by its scientific name Regalecus Glesne, the giant oarfish has been acknowledged as the longest bony fish ever in 2015 by the Guinness Book of World Records. The biggest of its kind has reached 11 meters (36 feet) although there have been unconfirmed reports claiming they’ve seen species that measured as much as 17 meters (56 feet). Wikipedia says, the “maximum recorded weight of a giant oarfish is 272 kg (600 lb).”

The creature is usually found “living at depths of 3,280 feet (1,000 m) but more typically to depths of 656 feet (200 m).” They are not fished commercially because they have inedible meat. They also do not have swim bladder.

About their behavior, the Wikipedia entry pointed out:

“Little is known about oarfish behavior. It has been observed swimming by means of its dorsal fin, and also swimming in a vertical position. In 2010, scientists filmed a giant oarfish in the Gulf of Mexico swimming in the mesopelagic layer, the first footage of a reliably identified R. glesne in its natural setting. The footage was caught during a survey, using an ROV in the vicinity of Thunder Horse PDQ, and shows the fish swimming in a columnar orientation, tail downward.”