With Rappler losing around 50k followers, supporters are scrambling to get back the likers in a campaign called #FollowRappler. Supporters are being asked to share the post by Superficial Gazette of the Republic of the Philippines, tagging 5 friends and asking them to follow Rappler.

But why is this happening?

Last week, after warring against the supporters of Pres. Rodrigo Duterte on social media, especially Mocha Uson who actually has a huge following, news site Rappler became the target of the viral campaign #UnfollowRappler which had variations, such as the #UnfollowRapplerChallenge and #UnlikeRappler.

For being ‘biased’, Rappler was slammed on social media; also, the site had claimed that Mocha Uson’s social media followers as bots and fake accounts, which led to the #UnfollowRappler campaign.

Within just a few days, Rappler lost some 50k followers because people believe that the site is biased and only reports news and information that are against Pres. Duterte but stays quiet about issues that put the president in a good light.

From over 3 million followers on Facebook, Rappler is down to around 2.95 million now. But while the number of unlikers might not really be so significant considering that 50k is still just a small percentage of 3 million, many bloggers believe that the loss is actually a big hit against Rappler, especially because their ‘reach’ on Facebook has also gotten lesser compared with the increase in other similar sites, even compared with that of Mocha Uson’s page. 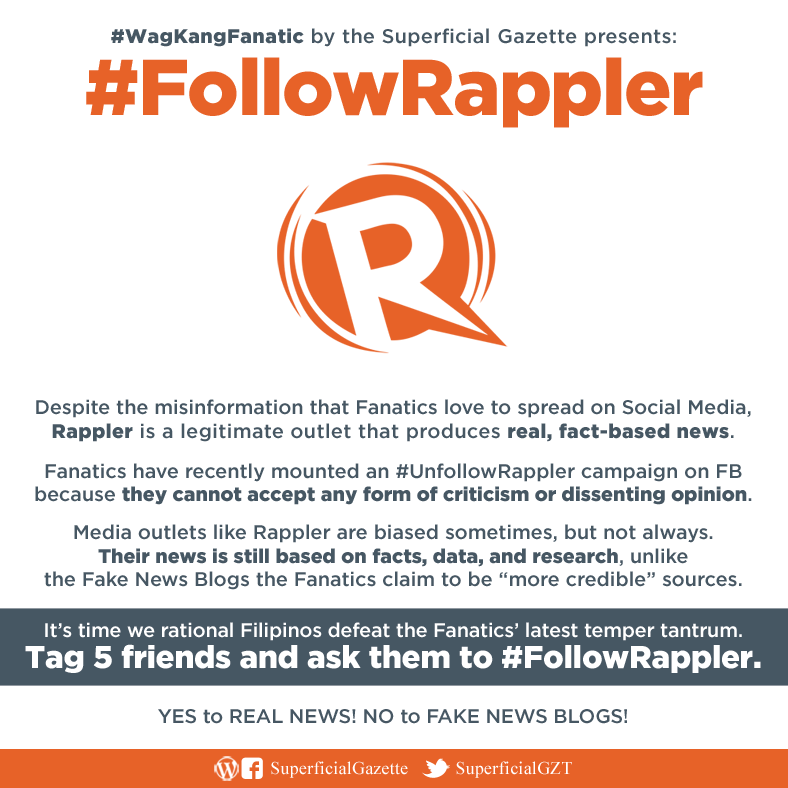 Photo by Superficial Gazette of the Republic of the Philippines / Facebook

In defense of Rappler, Superficial Gazette of the Republic of the Philippines wrote:

The Fanatics have been trying to cripple Rappler on social media simply because they cannot accept any criticism or disagreeing opinions, but they have failed – their pathetic little hunger strike has removed only around 50,000 of Rappler’s likes, out of nearly 3 million. Despite being occasionally biasED, Rappler is still a legitimate outlet that makes REAL NEWS.

It’s time we rational Filipinos destroy the Fanatics’ latest temper tantrum and show them that they cannot take over our space. Share this post, tag 5 friends, and ask them to follow Rappler while sharing this post in turn.

The Superficial Gazette of the Republic of the Philippines clarified their post, explaining in the comment’s section:

A few points of response / clarification for FAQs on this post: