Sen. Ralph Recto did not complete his postgraduate degrees, according to a report by Rappler. 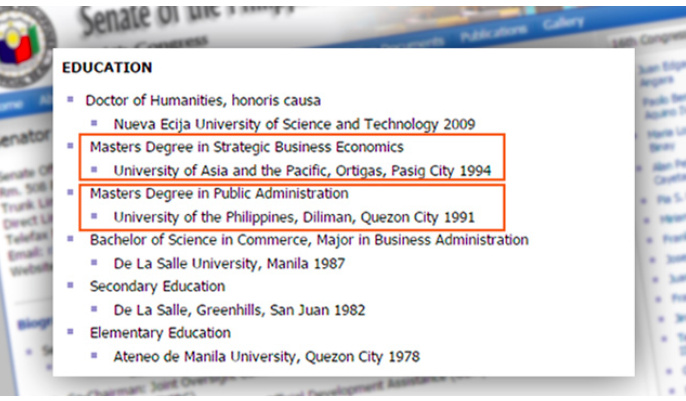 Recto quickly apologized and explained his side after receiving an email from Rappler.

According to the senator, he takes full responsibility for the errors.

“I take full responsibility. There was no intention to misrepresent. I’m sorry,” Recto said.

Based on the investigation conducted by Rappler, Recto earned a Certificate in Business Economics, which is an 11-month course, at the University of Asia and the Pacific.

Furthermore, Rappler discovered that Recto graduated from the College of Saint Benilde with a degree BS Commerce in 1989 and not from the De La Salle University which was indicated in his Senate bio-data.

Recto explained that he asked his staff to make the necessary corrections in his bio-data when he was still a congressman (1992-2001). According to Recto, he has not checked his bio-data since then.

Weeks after Rappler released a report indicating that Sen. Bongbong Marcos Jr did not complete his courses in The Wharton School of the University of Pennsylvania and Oxford University, the senator quietly acknowledged he committed false claims by correcting his resume.

According to Rappler’s investigation, Oxford and Wharton Schools don’t have any records showing Marcos Jr is in their lists of graduates.

“We can confirm that a Ferdinand Marcos matriculated at the University of Oxford in 1975 to read for a BA in Philosophy, Philosophy and Economics. According to our records, he did not complete his degree, but was awarded a Special Diploma in Social Studies in 1978,” University of Oxford spokesperson Clare Woodlock told Rappler.