Militant groups rallying during the inauguration of Philippine President Rodrigo R. Duterte were shocked (and pleasantly so) when their leaders were ‘picked up’ by members of the Presidential Security Group (PSG) – not to send them to jail but to actually have a dialogue with the newly inaugurated president!

You would normally expect these leftist groups rallying in the streets and being ignored by the leaders in such events yet seeing them speak with the president about the things they’ve been shouting out in the streets is definitely a surprise.

What’s even quite impressive is that the unscheduled meeting happened during the time slot allocated for the president to meet with his cabinet! It seems that Duterte is truly willing to listen to the sentiments of the leftist groups – and such was already apparent when he earlier invited some militant leaders to become part of his cabinet. 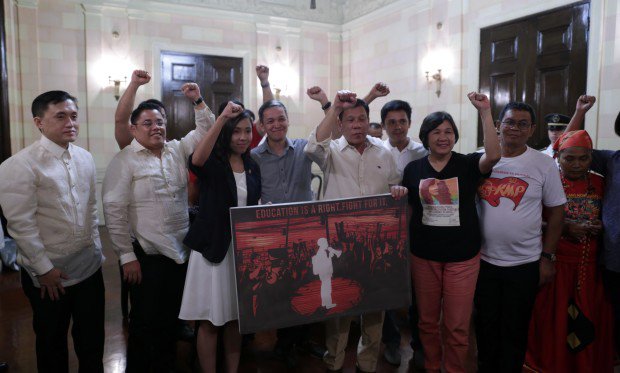 The meeting was held inside the Osmeña Room inside Malacañang Palace – and they were the only ones not wearing formal attired inside the palace yet despite the dress codes and existing protocols, they were allowed to enter the country’s seat of power and talk face to face with the president.

Reyes revealed that not only were they able to present their 15-point “People’s Agenda” during the dialogue, the president also assured them that he will respect freedom of expression. He even claimed that the president allowed them to hold their rally for the first State of the Nation Address (SONA) close to the venue, Batasang Pambansa.

The group was allowed to ask questions – and Duterte also gamely posed for a photograph with them after the meeting, while they held out his campaign sign: the clenched fist!

Could this mean that the leftist groups will be folding away their banners in support of the president? Well, not just yet… Reyes expressed happiness over progressives in Duterte’s administration but they will continue to seek the reforms they want to happen before they will truly stop rallying against the administration. But, at least, they got to talk about their plans with the president!