Home
Entertainment
Rain or Shine, Poor Dog Waits For Months At the Spot It Was Left Behind By Owners

A poor dog showed how pure is the loyalty and dedication of pets to their owners, as it waits for them at the exact spot it was left behind.

They say that when you give a dog a home, it will repay you with companionship and loyalty for a lifetime. This holds true for a dog that was seen on a busy highway in Ipoh Perak, Malaysia. Amid the heavy rains and even under the heat of the sun, a dog stays under a tree waiting for its owners to return. Unfortunately, it’s been months and there are no owners in sight to take him back. Like a modern-day Hachiko, the dog doesn’t lose its hope as it patiently waits at the exact same spot it was abandoned. 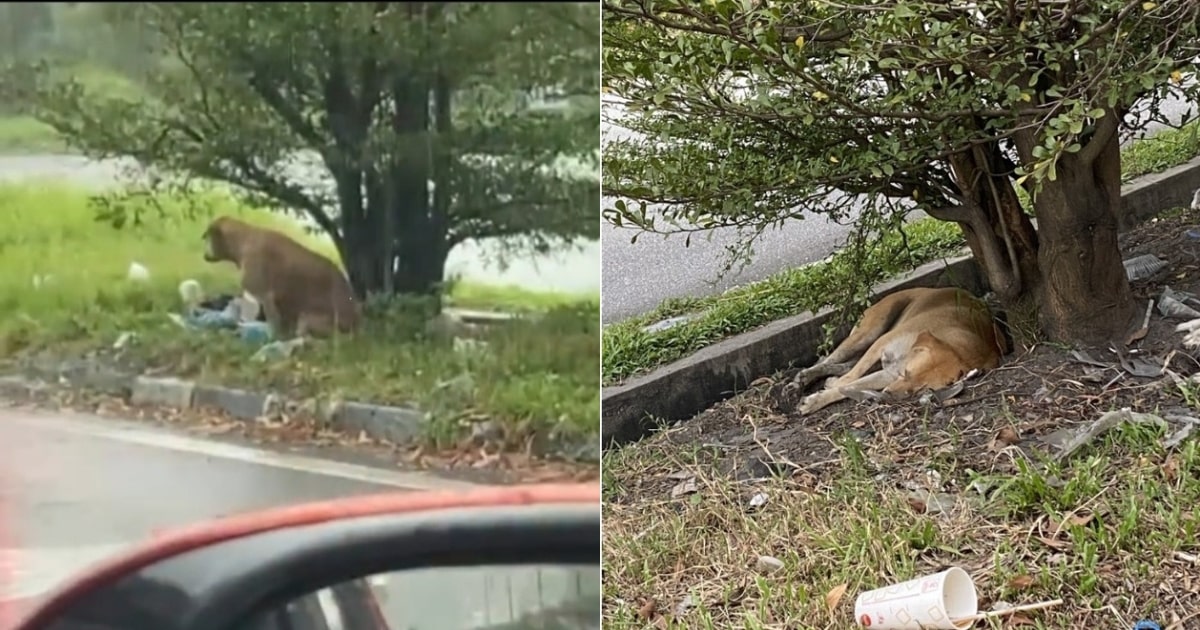 A video of the poor dog under the heavy rain was uploaded on Twitter by @lunaaaa72. After the post was deleted, it was re-uploaded by an animal rescue group “Pawsome Rescue Aid” hoping to raise awareness against pet neglect and abandonment.

On Instagram, @pawsome.rescue.aid wrote, “Please don’t ever get a dog if you are only gonna dump it. This doggy has been there in the same spot for months (rain or shine) waiting for his owner to take him back.”

As heartwarming as this story may be, this just is one of the many stories of dogs left behind and neglected by owners.

One of the rescuers revealed that some people reported seeing the poor dog at the spot even before the pandemic began in Malaysia. He shared how unfortunate it is that many pet dogs are being dumped on the streets by their owners.

He said, “There are many strays that are being dumped there as there is a dumpsite next to this junction called Papan Dumpsite.”

“But this dog is there at the traffic light most of the time, will only move from the spot to hunt for food, but will eventually return to the same spot.”

He said that they are working at rescuing the viral dog for adoption but it seems wary of humans.

“The doggy is still looking for a forever home and people have tried to approach him but it’s just hard to get him since he’s afraid of humans,” said the rescuer.

It doesn’t take much to give an abandoned pet a new chance at a good life. Sometimes, rescued dogs or cats only need food and shelter. In return, you will be rewarded with lasting support and companionship that no amount of money can repay.

Benefits of adopting a dog or cat

Shelters and animal groups always encourage the public to adopt instead of buying from puppy mills or even pet stores. This is because these places tend to prioritize profit above the welfare of the animals.

The Humane Society Organization stated many benefits that pet owners receive when they get furbabies through adoption. When you adopt an animal from a shelter/rescue home, you save a life. Not only do you give an animal another shot in life, but you are also freeing up a space at the shelter for another rescue animal to be taken in.

Adopting also promotes good mental health as caring for a pet will give you a sense of purpose and fulfillment. It will also affect your feelings of being lonely. The benefits and reasons to adopt seem endless. So, go ahead and adopt your new furbestfriend!