MANILA, Philippines- GMA News anchor and reporter Raffy Tima has expressed his disappointment over President-elect Rodrigo Duterte’s controversial response to his wife Mariz Umali during a press conference held in Davao City On Tuesday, May 31.

In the press conference, Duterte whistled and sang “Kaibigan” to Kapuso reporter Umali after she asked him a question. Netizens who saw the video of the incident claim that Duterte catcalled Umali. 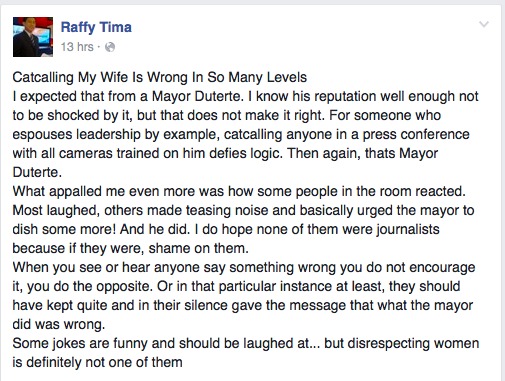 In his Facebook post titled “Catcalling My Wife Is Wrong In So Many Levels”, Tima emphasized that the outspoken Mayor’s action, which he doesn’t find shocking based on his reputation, is not right.

“I know his reputation well enough not to be shocked by it, but that does not make it right. For someone who espouses leadership by example, catcalling anyone in a press conference with all cameras trained on him defies logic,” Tima wrote.

Tima also expressed his dismay over the reaction of people in the room. According to Tima, most people in the press conference laughed, while others made teasing noise encouraging Duterte to do more of his antics.

“When you see or hear anyone say something wrong you do not encourage it, you do the opposite. Or in that particular instance at least, they should have kept quite and in their silence gave the message that what the mayor did was wrong,” he added.

Tima ended his post with the statement: “Some jokes are funny and should be laughed at… but disrespecting women is definitely not one of them.”

As of this writing, Tima’s post has gone viral amassing over 4,000 shares.

Catcalling is a Criminal Act in QC

In April this year, the Quezon City government passed the Gender and Development ordinance which aims to reduce catcalling and other forms of sexual harassment on the street-level against women.

People caught violating this ordinance would be fined P1,000 to P5,000 and imprisoned from one day to one year.

City administrator Aldrin Cuña told GMA News: “Harassing a woman or a girl in public… catcalling, when one calls you ‘Miss Beautiful’ or says ‘let me kiss you’ or ‘you are sexy’ – these already comprise slight offenses. ”