Home
Lifestyle
Relationship
Proof that Age Does Not Matter: The World’s Oldest Newlyweds

Age does not matter when it comes to love. This has been proven time and again by many people who defied all odds.

Some couples have large age gaps, even transcending several generations so that many people frown upon the union because one of them is old enough to be the other’s parent or even grandparent! As crazy as that might seem in our society, who are we really to judge them for their love?

Now, there is this viral picture of a couple who has beaten the world record for the oldest newlyweds held by French couple Francois Fernandez and Madeleine Francineau.

George Kirby and Doreen Luckie have been together for 27 years and have seven children between them. Today, they already have 15 grandkids and 7 great grand-children. 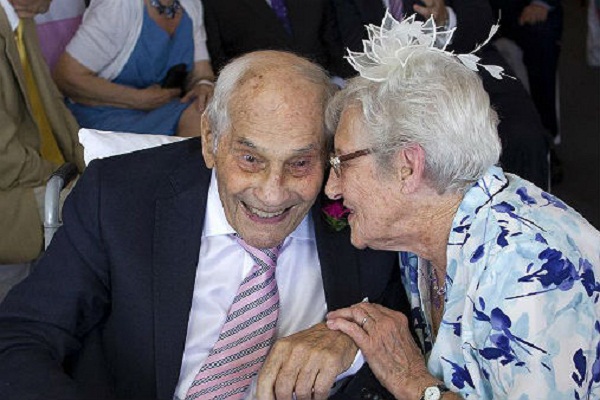 But why did they wait this long to get married? Well, they just had been too busy with their families and their work to even think of marrying. Then, on Valentine’s Day this year, George proposed to the love of his life (though he did not get down on his knees as he might not be able to stand up if he did!).

This is simply proof that forever exists!

Guinness World Records began as a book listing all the world record holders in various categories since 1955 but has since included TV series, museums, and a website, among others.

You can count on Guinness World Records to provide an accurate list of world record holders because all records they list are personally verified by staff. The verification process might be lengthy, with those attempting to top a previous record needing to wait for weeks or even months for confirmation, but the public knows that the records are not dubious as they are a trusted source.