Japanese Prime Minister Shinzo Abe visited the Philippines in a 2-day state visit which had seen him not just in a formal business meeting with Pres. Rodrigo Duterte but also in less formal activities such as getting a tour of Duterte’s simple house in Davao City as well as having breakfast at the president’s small kitchen.

But that’s not all! The prime minister also adopted a captive Philippine eagle; though the adoption is more of a formality and he’s not allowed to bring the eagle back home. In fact, the prime minister wasn’t able to see the eagle and was only given a stuffed eagle toy wearing a medallion engraved with “Sakura is adopted by Mr. Shinzo Abe”.

The prime minister earned praise from many Filipino netizens, however, when he gamely tried durian and suha (grapefruit) presented to him by Pres. Duterte. While suha was definitely easier to eat, durian often does not look appealing and mostly repels people by its smell; however, it is quite tasty! 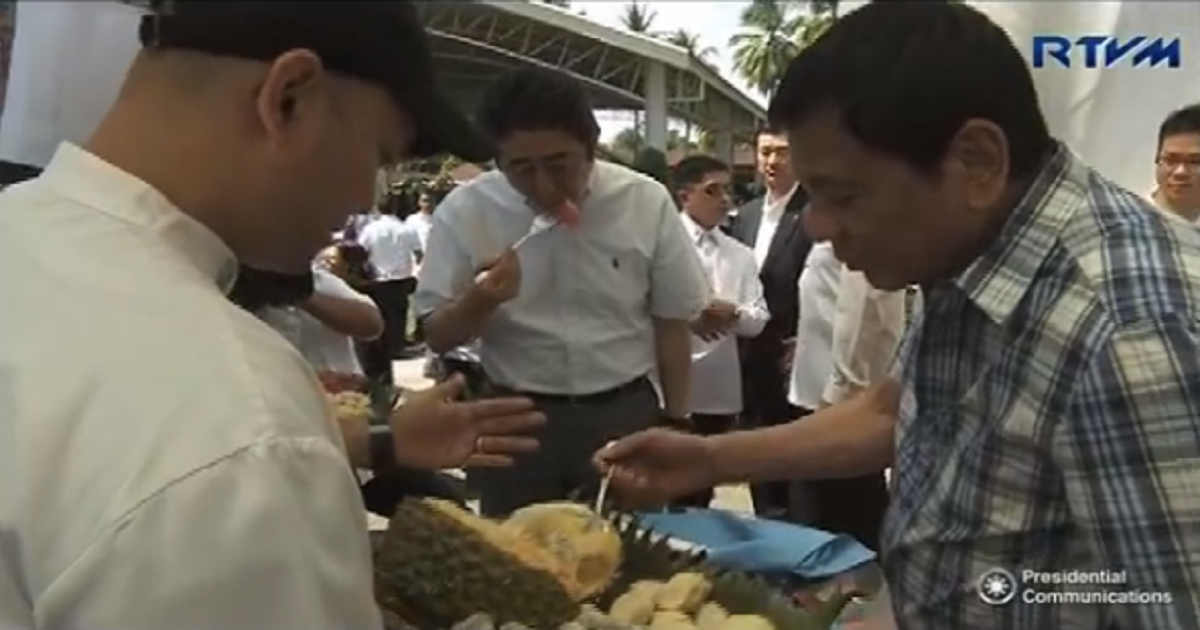 What amazed netizens is that the prime minister did not hesitate to take a pick of the durian and eat a piece. This shows that he’s ready for anything and is quite polite, also humble, to enjoy what he was served even if it does not smell nice at all. It also shows that he trusts Duterte that the food was good – and it really was great!

Durian is a fruit native to southeast Asia. In the Philippines, durian is best known to come from Davao, Pres. Duterte’s hometown. The fruit has hard spikes.

While the scent of durian takes getting used to and can be quite pungent that it prevents many people from even trying to take a bite, the meaty flesh is quite delicious and can be eaten raw or as processed candies and jams.