Upon arrival in Zamboanga City, southern Philippines, President Rodrigo Duterte bowed and kissed the hand of its mayor, Mayor Beng Climaco – despite her publicly campaigning against him and deliberately not giving permit and electricity during his campaign sortie in the city!

But while Mayor Climaco did everything she could to campaign against then-Davao City Mayor Duterte, in favor of former Interior Secretary Mar Roxas as president of the Philippines, now-President Duterte shows that he has no bad blood against the mayor and was willing to ‘forgive and forget’ all for the sake of unifying the country; and also showing that despite his rough persona, he really is a gentleman. 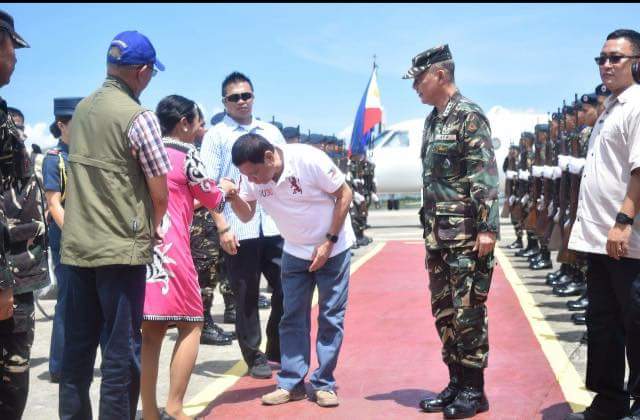 An admin for the Facebook page, President Rodrigo Duterte, shared two photos showing Pres. Duterte bowing down to kiss the hand of the mayor – a Filipino gesture that shows respect. These photos came with the following caption:

Upon his arrival in Zamboanga City, President Duterte kisses the hands of Mayor Beng Climaco. As you all remember Mayor Climaco publicly campaigned against Duterte and fully supported and campaigned for Mar Roxas.

She even went to the extent of not providing permit and electricity to Duterte’s campaign rally in Zamboanga. But Duterte as President of the Philippines shows he is a uniting president and a gentleman shows his respect to the lady mayor.

His charm and sportsmanlike behavior won over Beng Climaco and have infected her with the Duterte fever.

As I look at the photo I ask myself if I am in the shoes of Duterte, can I do what he did to a person who have tried to destroy me. Can I forgive? Will I be vindictive like what Pnoy did to Gloria and to those who are against him? Will I be like Mar Roxas who said, “Remember you are a Romualdez and the president is an Aquino.”

But Duterte did the unexpected. He bowed and kisses the hands of the lady mayor who was all out to demolish Duterte so he will not win.

I can only say Duterte is awesome and that word is an understatement to describe him. What more can I say of you President Duterte?

Indeed, these photos speak volumes of the character of Pres. Duterte. Slowly but steadily, he is winning over many of his former detractors… all for the love of our country. Mabuhay po kayo, Pres. Rodrigo Duterte!