Weddings are one of the most important events in a person’s life; thus, most people want it to be unforgettable — even if it means spending all their life’s savings just to make the event as wonderful as possible. Some people would even loan huge amounts of money just to experience the best wedding they could ever have (…in hopes that it is much better than their friends’ weddings!).

But there is this couple who gained the internet’s admiration after a photo of their 3-tiered wedding cake went viral — for it wasn’t a cake that one would visualize in a wedding.

You would say a wedding cake should have the most beautiful decor, with white icing and pretty flowers. The cake topper should be unique or feature the classic figurine of a bride and groom. Right?

Well, this couple had a different wedding cake and everyone laughed at them for it. Instead of the expensive heavily decorated cake, they had a 3-tiered cake made out of sliced bread and butter! 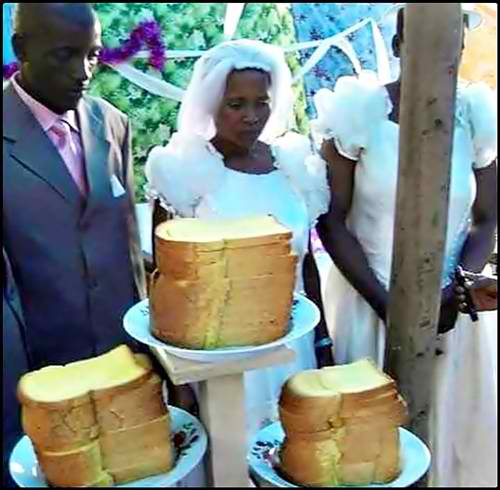 People laughed at their poor, ugly cake but the couple did not mind because they knew that it is not the cake that is important in the wedding but the union of their two hearts as one.

Yes, it might have been a laughable simple cake but at least they did not take thousands of dollars in various loans just to make it appear like they could afford an expensive wedding cake when they actually couldn’t!

The two must have been the talk of the town for weeks, possibly years, yet they are going viral on the web for a different reason: because people are admiring their “real” wedding cake!