But even before the health center opened, Leah felt that the baby was already going to come out. So, she went to a grassy spot outside the police station and simply tried to push the baby out of her body.

The police personnel on duty immediately rushed to help her, with PO3 Sper Matas-Ramos becoming the instant midwife even if she does not have any experience in delivering a baby – none of the policemen on duty at the time had any; though several cops in that police station had experienced delivering babies for the women who experienced the same situation as the Ladiagarongs.

With the husband’s assistance, the policewoman was able to deliver the baby safely – catching it as soon as it went out. It was the midwife from the health center who cut the umbilical cord because the police didn’t have sterilized equipment. 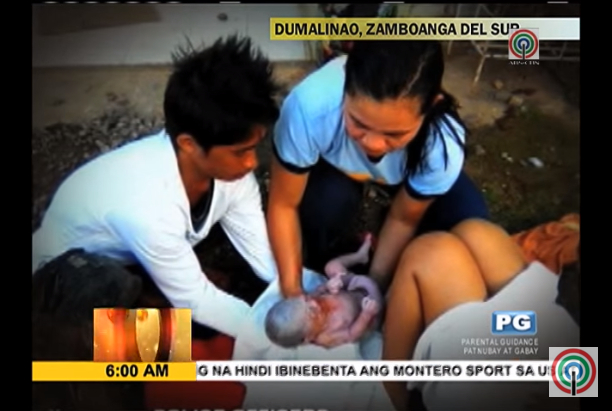 Pictures of the unconventional birth went viral on social media, with Matas-Ramos and her colleagues at the station being praised by netizens for going beyond their call of duty to help this woman in need.

After the photos went viral, Matas-Ramos was interviewed by ABS-CBN’s Umagang Kay Ganda. She expressed happiness with the situation and thanked Ladiagarongs for the opportunity to turn the spotlight on the positive side of the police force, especially those in their station.

Meanwhile, the couple had already gone home with their newborn baby.

Health Centers in the Philippines

With little access to the hospitals in the big city or even the district hospitals in key towns, many people in the Philippines heavily rely on the health centers for their medical needs — whether for medications or as exemplified in the report above, as venue for women to give birth or relevant check-ups like pre-natal and post-natal.

While most health centers do not have a permanent doctor or nurse assigned, the town might assign medical health personnel such as doctors to work at several facilities so these could at least have a licensed medical practitioner even if it is just once a week.